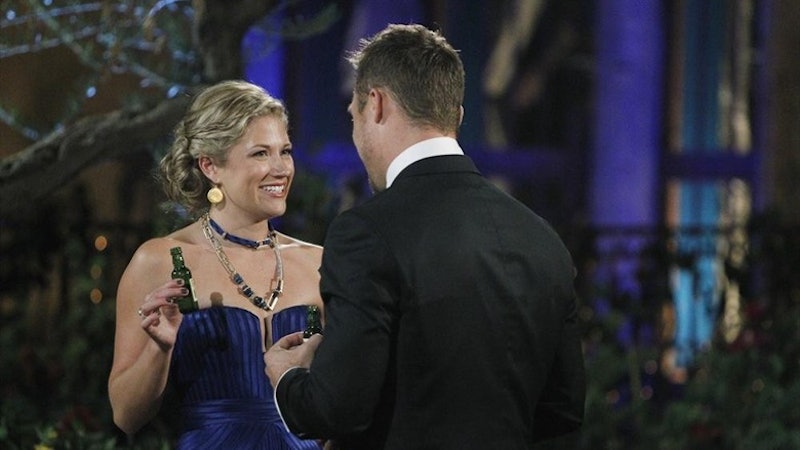 On Monday's Bachelor, one woman did what many before her have tried to do: eliminated contestant Jordan returned and attempted to get a rose from Chris Soules. Unfortunately, like many others have discovered, there's about a zero percent success rate on that kind of stunt. Jordan confronted Chris at his hotel after driving six hours to see him to ask for a second chance. She confessed that she was a little drunk the night she was sent home and wanted to make a better impression. He agreed to speak with her, but ultimately ended up sending her packing shortly thereafter in order to be fair to the other women.

But Jordan shouldn't feel too bad. She's far from the only spurned woman to want another go. Even male contestants have been known to try, try again. But these people have to know that the odds they're actually given a rose are pretty low, right? In the history of The Bachelor and Bachelorette, I found that eight contestants have returned, and seven of them were sent home the very same week they tried to come back.

I suppose Chris set a bad precedent when he allowed Kimberly to stick around after her night one elimination. No wonder Jordan thought he'd be open to taking her back. But Kimberly was still sent home that same week, and Jordan should have known from previous seasons that it never works out when you try to return.

On Ben Flajnik's season, Kacie Boguskie tried to come back to "warn him" about Courtney Robertson's behavior. Not only did he ignore her warning, but he also didn't take her back — and she ended her trip sobbing on the floor of the hotel hallway. No one should have to go out that way.

Kacie wasn't the only contestant who tried to disguise their hope for a second chance as a return to warn the Bachelor/Bachelorette. Perhaps they feel like framing their second chance like that makes it look like it's for purely selfless reasons. But we all know why they're really there — they want a rose. Jake Pavelka returned on Jillian Harris' season after being eliminated to tell her that another contestant allegedly had a girlfriend back home. She ignored his warning and gave Wes Hayden the rose anyway, then sent Jake packing for the second time.

Other times, returning contestants are more honest about why they're there, and it usually has something to do with needing closure. But even those people aren't fooling me. Perhaps they do need closure, but what they probably want is another shot and the hope that they won't need closure after all. Ryan Park came back during the fantasy suite week of Ashley Hebert's season because he needed to understand why she let him go. "Something was in my mind thinking it could be a really magical ending if we had more time," he told Digital Spy after she let him go the second time. "I'm happy I got that closure I needed."

Ryan was actually the second guy to try again on Ashley's season. A couple of weeks earlier, bad-boy Bentley tried to come back, even though he was the one who walked out the first time. Thankfully, she told him no, because he was the worst.

The most return-packed season of the show was Jillian Harris' season. In addition to Jake Pavelka's attempted comeback, eliminated contestant Reid Rosenthal returned and even proposed to Jillian. Sadly for him, she wasn't interested. But Jillian's season also contains the only example of a return that worked out.

Ed Swiderski left in week five and returned week seven. He was welcomed back into the fold and even went home the winner of the show, which is a pretty amazing turnaround. The catch, though, is that he was never eliminated by Jillian herself. Ed left voluntarily two weeks earlier because his job was on the line. In the end, he decided Jillian was more important than his work and returned.

Not every contestant is going to receive the warm welcome that Ed got. The fact that he took himself out of the competition when Jillian wanted him to stay is probably what allowed him to return safely. In every other case, the contestant making the comeback was previously eliminated, and it almost never works out in their favor.

But that's probably not going to stop people from trying, or producers from agreeing. After all, logical decision making goes out the window the moment everyone enters the mansion, and spurned second chances at love make for really good TV.