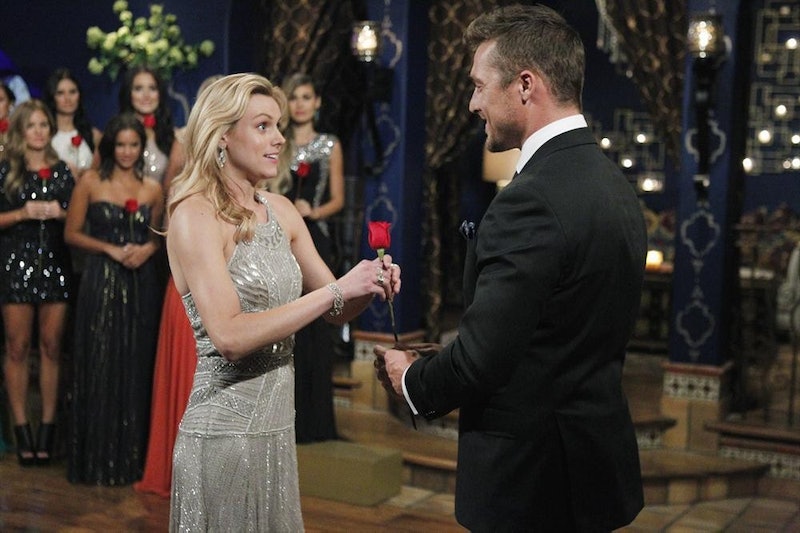 I never believe Chris Harrison when he says that a season of The Bachelor is like nothing we've ever seen before, but now that Chris Soules' season is underway, I might have to eat my words. I don't know if it's ABC pulling the strings behind the scenes or if Chris is making his own decisions, but on Monday night's episode, he threw his "potential wives" more than a few curveballs, and I'm not sure if I like it. Don't get me wrong — I'm all about switching things up, especially on a show that's lasted 19 seasons. But I'm really not a fan of the changes Chris is making on The Bachelor , especially since they aren't fair to the women vying for his heart.

Right from the get-go, change number one was official. After Kimberly came back and pleaded her case to Chris when he kicked her off in last week's premiere, Chris decided to bring her back in — and the faces of the other remaining 22 women when they realized she was staying basically said it all. Usually, I don't condone Bachelor contestants being snotty about other contestants, but in this case, I can't help but feel it's kind of justified. Now that Kimberly's back, the game is totally changed for the worse.

Not only is there an extra competitor in the mix, but what about the other seven women who got the boot last week? None of them got a second chance, because until now, it wasn't an option. Also, Kimberly snagged a spot on the first group date just minutes later — a spot that would have gone to one of the other women had she not come back — not to mention the fact that this is setting a terrible precedent for future rose ceremonies. After all, it's not exactly fair that someone else gets a re-do if Chris isn't going to hand it out to everyone who requests one.

The other big change? During the first group date, Chris sprang a one-on-one date on the women — and none of them knew it was coming. Essentially, it cut their group date short, and although everybody agreed that it was "fair" of Chris and so sweet that he trying to be a gentleman, it was easy to read between the lines and tell that wasn't how any of them were feeling at all. Instead, Chris basically makes their competitors seem like the bad guy instead of him, because at the end of the day he's the one who has to hurt every single one of these women — but one, if all goes well.

Despite having gone through this process with Bachelorette Andi, Chris is so oblivious to the fact that each of these women truly believe that he is their future husband. They're so invested in him that it's almost heartbreaking to watch when they're let down in the moments they remember they're up against nearly two dozen other women fighting to win his heart. Maybe The Bachelor should take a break from the random changes for awhile? I (and probably these poor women) can't handle much more!

More like this
Becca Tilley Confirmed Her & Hayley Kiyoko’s 4-Year Romance With A Heartfelt Note
By Brad Witter
How Reality TV Stars Conquered Your Bookshelves
By Anna Peele
Kylie Jenner Roasts Kendall For Her Cucumber Cutting Skills On TikTok
By Jake Viswanath
What’s New On Netflix: 'Stranger Things' & 'Somebody Feed Phil' Return
By Arya Roshanian
Get Even More From Bustle — Sign Up For The Newsletter