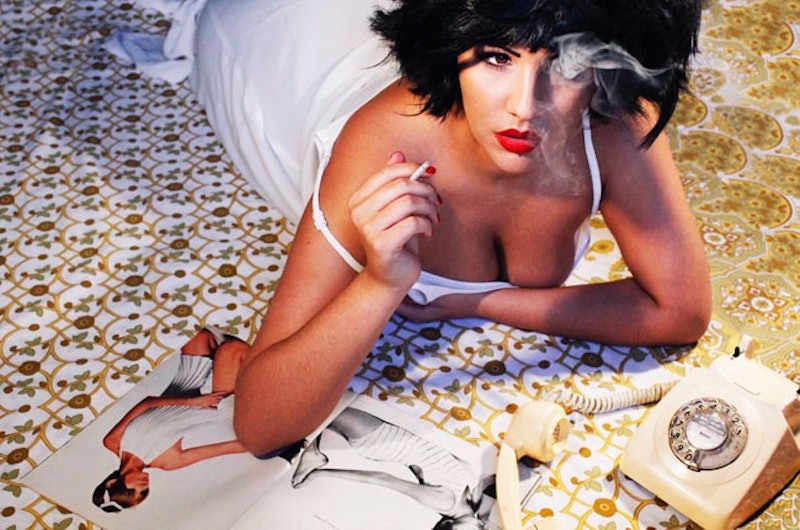 Photographs of nude women have been around since, well, photographs. However, few women who have themselves been photographed naked decide to get behind the lens and take charge of the shoot. Nadia Lee Cohen, a london-based photographer, did just that when she created "100 Naked Women," a photo series which features real women in stark, vibrant tableaus.

"I started shooting ‘100 Naked Women’ mainly because I am female and know how liberating it feels to have a strong nude photograph," she told The Huffington Post.

Each of her images is imbued with this awareness, whether capturing a full reveal or a more modest angle. Some of the women are models, while others are everyday people she cast off of Facebook and Twitter. Cohen's photographs share a crisp, otherworldly quality, and although the women may be indulging in mundane activities like eating pizza, sunbathing, or smoking cigarettes, it only injects her work with a thoughtful, Cindy Sherman-esque performativity.

Cohen tells Bustle that the series is not yet complete, and she will be casting models and shooting throughout the rest of 2015. The current images circulating in the press are only the first part of this project, and her final selection will be collected in a book published by Sturm & Drang out early next year. Visit Cohen's website for more NSFW shots.