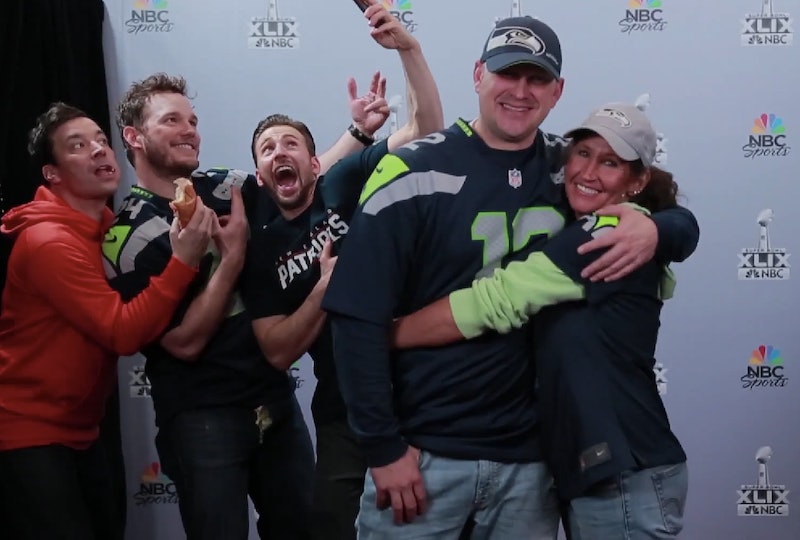 After Chris Pratt and Chris Evans' Super Bowl bet ended, their fun didn't stop. In addition to them taking selfies at the big game on Sunday, they took some even more epic pictures. Or, well, Evans and Pratt photobombed fans with Jimmy Fallon for a Tonight Show segment and posed for the most hilarious snaps ever. It's as amazing as you'd imagine, and there's a chance you may literally roll on the floor laughing after you watch the video of their insane antics.

It starts out innocently enough with the three of them sneaking up on fans as they get their pictures taken, but escalates quickly with triple piggyback rides, Pratt sticking a hoagie in his pants and Fallon eating it afterward, and all of them getting lei'd. There's also an epic jump from Evans that will make you wonder if he did all of his Captain America and Avengers stunts himself and some funny faces from Pratt that will make you miss Parks and Recreation even though it's not over yet. After you watch the video once or twice below, check out six of the most epic moments from their photobombing fun. And if that's not enough for you, check out even more celebrity photobombs, because who can really get enough of them?

When They Lei'd It All On The Table

When They Devoured a Hoagie Together

With Pratt gently guiding Evans to Lady & the Tramp mode.

When Pratt Put The Hoagie Down His Pants

Some things are worth unbuckling for.

When Fallon Ate That Hoagie...

Lettuce in the pants.

When An Epic Triple Piggyback Happened

Could be a little sexual, but it's not.

When Evans Jumped Over Pratt's Head

Now I'm on the floor.

More like this
Freddie Flintoff’s Wife Has The Cutest Nickname For The Famous Cricketer
By Frances Stewart
Watch Emma Raducanu’s Incredible Response To Her Early Wimbledon Exit
By El Hunt
Kimberly J. Brown & Daniel Kountz Looked Back On Their ‘Halloweentown’ Romance
By Stephanie Topacio Long
Jesse Tyler Ferguson Had A Funny Run-In With A Fellow ‘Modern Family’ Alum
By Grace Wehniainen
Get Even More From Bustle — Sign Up For The Newsletter