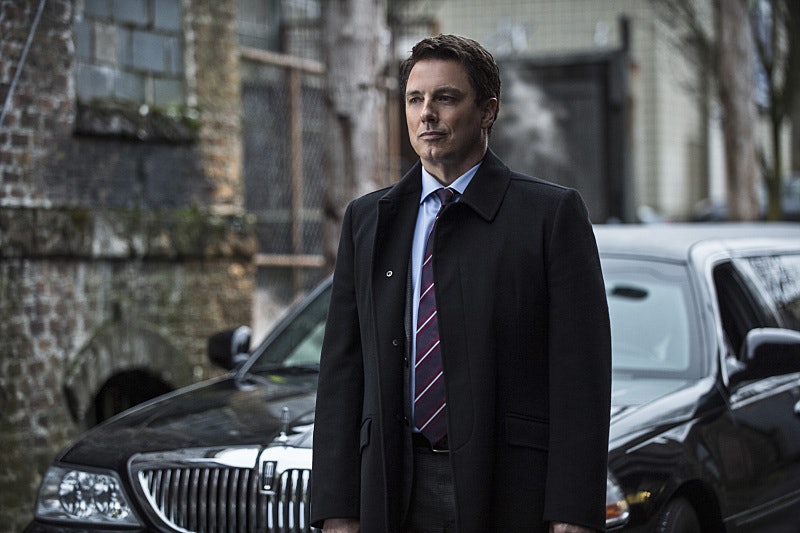 The thing about a show like Arrow is, sometimes the dead don't always stay that way. Take Oliver, for example. Dude was legit stabbed right through the stomach with a massive sword, fell off a cliff in the middle of a blizzard, and yet he's still alive. Oh, and remember how we all thought Sara and Slade Wilson both died on the island? Nope! It was simply the product of yet another massive fake-out. But that's all part of Arrow's genius. It makes us whole heartedly believe in one thing, just so it can shock us later with an epic plot twist. In fact, it's gotten to the point where I'm seriously starting to question all of the other deaths we've taken for granted, such as the alleged murder of Malcolm Merlyn's wife and Tommy's mother, Rebecca.

For those of you who need a bit of a refresher, Rebecca dedicated her life to helping the residents of The Glades. However, due to the area's high criminal population, she was mugged and suffered a fatal gunshot wound during one of her visits. Her death served as the catalyst to Merlyn's transformation into the Dark Archer and was the main reason behind The Undertaking. He sought vengeance for his wife's death and by the end of Wednesday night's episode "Uprising," he'll finally come face-to-face with Rebecca's actual killer, Danny "Brick" Brickwell. And while that in itself makes for a pretty intense storyline, a big part of me can't help but wonder if there's more to this lady's fate than meets the eye.

Think of it like the proverbial tree falling in the woods. If we didn't actually witness the death ourselves, did it ever really occur? The problem is, though, that I have absolutely no concrete evidence to back this theory up — just a nagging hunch that a surprise twist like this would be right up Arrow's alley. Judging solely from her DC Comics origin, no shocking resurrection is in sight. So if the series were to bring her back from the dead, it would be completely off-book. Not that Arrow has a problem with straying from its comic book counterpart, given that it's done so multiple times in the past. But would Rebecca's return stray a little too far for comfort? Possibly — but man would it open a whole new range of possibilities for the series.

For starters, Rebecca could become the latest superhero (or villain) to visit Starling City. And given that she doesn't exist in the DC universe, literally anything could happen. I mean, if she really has been alive this whole time, odds are she's been up to something pretty secretive. (Otherwise why hide from your family?) So just learning what exactly she's been up to would be incredibly interesting.

Then there's the fact that it would make all of Merlyn's wrongdoings be for nothing. All that death, all that time away from his son — would now be pointless. I imagine that would be some serious guilt to cope with, even for someone as dark as this archer. Would he be pleased to see his wife again or could it spiral into a War of the Roses type of situation? Either way, I'm all for some kind of marital conflict and/or resolution between these two.

John Barrowman has been seriously underused this season, but something like this would more than make up for it and turn everything we thought we knew about the Merlyn household completely on its head. Bring it on, Arrow writers. I'm into it.