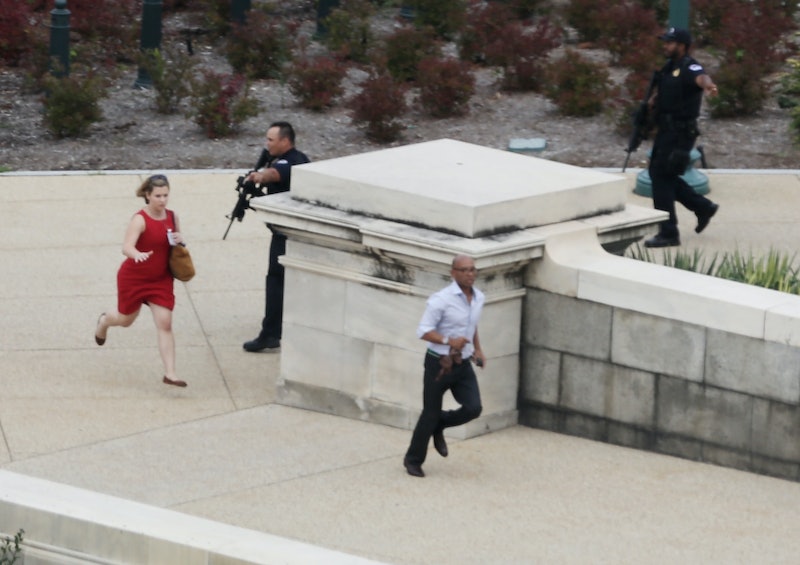 On Thursday afternoon, shots were fired outside the Capitol building in D.C., prompting a lockdown on the Capitol and a freezing of the debates inside of it. Tourists were apparently told to "flee" and politicians were ushered inside the building after several witnesses heard gunshots. The suspect is thought to be female, and believed to have been killed when shot by police. Everyone inside the Capitol was instructed to stay put and avoid windows and doors, as police rushed to protect the Hill. Authorities have confirmed that there was little to no threat to those inside the Capitol, and the incident was a police pursuit that ended outside the building.

Multiple news outlets have reported that the chaos began outside of the nearby White House, when the female suspect used a black car to try and ram the White House gates. It's alleged that when a Secret Service agent jumped in front of the car to stop her, she rammed the car into him, and drove off. Police chased the alleged suspect to the Hill, where they allegedly fired a gun at her several times — the cause of the overheard gunshots — which apparently prevented the incident from progressing further. Fox News has footage of the car chase.

The lockdown on the Capitol has been lifted, meaning that officials believe there to be no imminent threat. The Senate has been adjourned until Friday morning, meaning that the government shutdown will definitely enter its fourth day. The House took a moment of silence for the victims.

At a press conference just after 3:30 p.m., the Capitol Police Chief confirmed that although "multiple scenes" had been involved — follow-up reports suggest two main emergency scenes, outside the White House and the Capitol — there seemed to have been only one incident, which did not appear to be linked to any terrorist activities. A police officer, potentially the Secret Service officer, is confirmed injured, but according to the Chief they were "conscious and breathing" at the time of the conference.

CNN showed live video of a child that was allegedly recovered from the suspect's car. Other outlets have blurred the child's image.

Griffin promptly deleted the Tweet, but not before causing a firestorm of media criticism for his insensitivity. He later admitted that the tweet was "not helpful."

The victims and their families are in my thoughts and prayers. The shooting today is a terrible and inexcusable tragedy and an act of terrorism. No one but the shooter is to blame. We are still processing information about this shooting, but as I have been saying for days, we all need to choose our words wisely because violent rhetoric only coarsens our culture, creates an atmosphere of incivility and is not helpful. I tweeted out of emotion but agree that the timing was not helpful.

AP posted this video of a witness recounting the scene of the shooting.

One Instagram user posted this image of the scene in D.C., because that's what what filters are meant to be used for.

More like this
What To Know About Martin Bashir After Watching 'The Crown'
By Bustle UK
Read Dan Levy's Heartbreaking Message After The Club Q Shooting
By Stephanie Topacio Long
Iran Has Issued A Death Sentence Over Mahsa Amini Protests
By Catharina Cheung, Darshita Goyal and Maxine Harrison
Ghislaine Maxwell Is Serving Her 20-Year Prison Sentence In Florida
By Gretchen Smail and Brad Witter
Get Even More From Bustle — Sign Up For The Newsletter