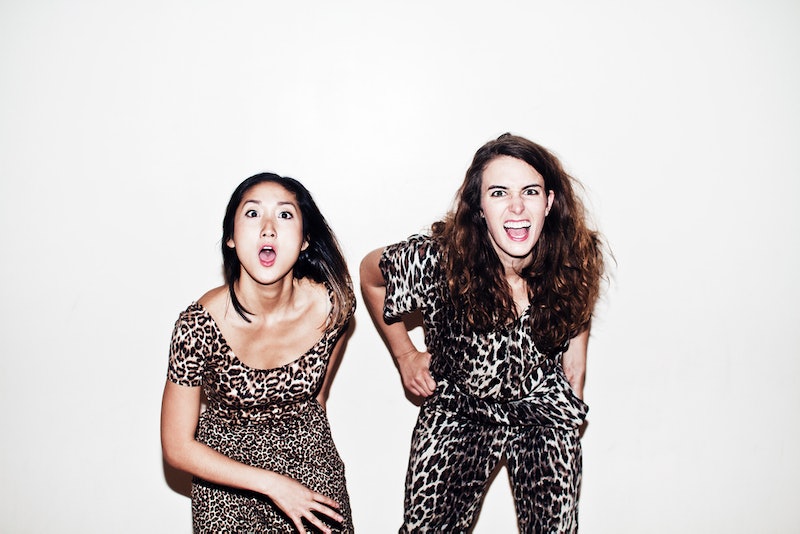 What's funnier than shame? Most of the time, pretty much anything — an incorrectly told knock-knock joke, a sharp kick in the shins, even Dilbert — but in the hands of Soojeong Son and Ginny Leise, creators of live comedy game show-cum-video series The Shame Game, the uncomfortable emotion is simply a shortcut to awesome comedy. "Shame is a useless, stifling emotion, one that you're reminded of when you're in the shower going 'ughhwhyyy'...." Leise tells Bustle, "[and] expressing this stuff on stage helps you air that out."

Son, a comedian and choreographer, and Leise, a comedy writer and performer who's appeared on live comedy shows like Awkward Sex and the City, met in an improv class three years ago. The duo started an improv team called Das Buttverk, and in 2014, began producing The Shame Game, a live event in which stand-up comedians compete to tell the night's most shameful personal story.

While the idea of competing to be considered the most shameful person in the room is pretty danged funny, Leise and Son also feel that having performers publicly own their shame helps to destigmatize the emotion. "Shame is compelling to us because it exposes comedians' vulnerability and honesty," says Leise.

Not to make this all sound like a Very Special Episode of Full House or anything. Son and Leise's top priority is making you laugh, and their hilarious tie-in comedy video series, also called The Shame Game, explores the shamefully funny side of having a racist boss, trying (and failing) to dance like Beyonce, and, most recently, being a woman and having dudes try to "helpfully" shame you for your opinions:

In the spirit of the show (which will next be performed this Friday, February 6, at Brooklyn's The Bell House) I talked to Son and Leise about shameful childhood moments, dirty Fleshlights, and Broad City.

1. What is your favorite piece of unsolicited advice to give?

​Soojeong: Don't wear thongs. They will give you hemorrhoids.

2. What is the strangest thing in your purse/backpack/bag right now?

G: Crumbs left over from all the cookies I stole from a corporate hosting gig this afternoon.

3. What was the weirdest thing you did as a kid?

​S: I didn't have a lot of friends in elementary school, so I got really into analyzing stones. I would steal large decorative stones from my neighbors' yards to examine the mica and quartz with a magnifying glass. I always returned them.

G: I peed the bed for years. My parents tried everything, and eventually resorted to making me wear an alarm device that got pinned to my nightshirt and connected to a maxi pad-like thingy. If I started to pee, the alarm would sound and wake me up. I wore it at sleepovers.

G: I'm a terrible liar! Everything I think is all over my face. That said, my restaurant/office-y resumes are huge, stinkin' lies and they have never failed me.

5. What is the most ridiculous thing that ever happened to you on tour?

G: Once, on the "Awkward Sex & the City" tour, we found a DIRTY FLESHLIGHT in the greenroom.

6. What is the best thing that ever happened to you on tour?

G: The very first show on the "Awkward Sex & the City" tour, I was sick as a dog and running a really high fever. The show sold out and the crowd was loving it. I powered through my set on pure adrenaline. After my last joke there was a laugh break and I just stood there, pouring sweat, and thought, 'Oh, this is what joy feels like.'

7. What was the last book/movie/TV show/album to totally bowl you over?

​Movie: American Sniper. I went in thinking it would be a fun Jason Bourne-ish movie. Instead, it was a cracked out Zero Dark Thirty and I cried so hard.

Album: The Pinkprint by Nicki Minaj

8. What inspired you to create The Shame Game?

​S: Ginny asked me to do it and told me that I could wear leopard print and dance.

9. What are you doing right this second?

G: Eating popcorn and listening to The Pixies, thinking about how I really need to clean my room before Soo comes over tomorrow morning.

10. What is your least favorite food to smell?

More like this
Everything We Know About Jerry Seinfeld's Pop-Tart Movie
By Radhika Menon
Emma Thompson, Lashana Lynch, & Stephen Graham Lead Netflix’s 'Matilda'
By Sophie McEvoy
Everything To Know About 'My Big Fat Greek Wedding 3'
By Grace Wehniainen
Alicia Silverstone Has Recreated An Iconic 'Clueless' Scene
By Frances Stewart
Get Even More From Bustle — Sign Up For The Newsletter