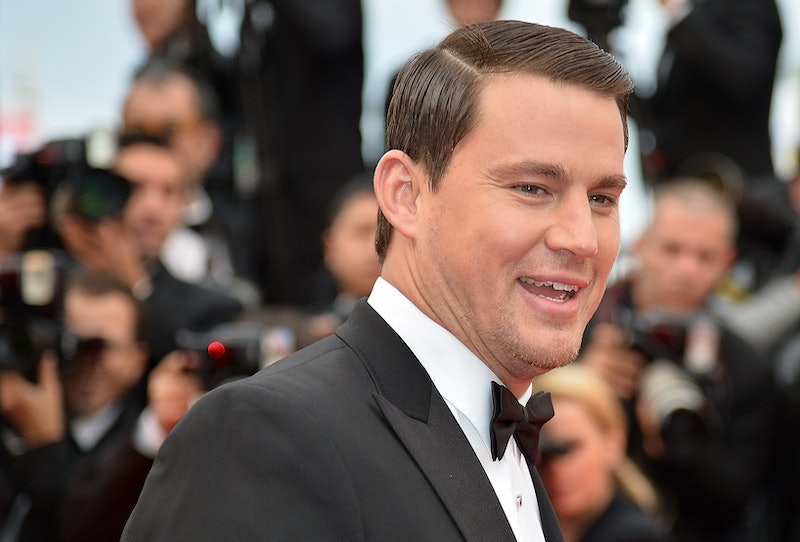 Tomorrow the world's eyeballs can expect to be greeted with the first footage of Magic Mike XXL via the film's first trailer. That will premiere on Ellen. In the meantime, our eyeballs still have a lot to deal with: The Magic Mike sequel's first poster is quite the eyefull. And yes, it's got some penis wordplay going right off the bat.

The poster is a stirring, subtle work of pop cultural art: There Channing Tatum stands, a Pharrell Williams-sized hat perched atop his head, legs impressively bowed, duck-face on fleek, pointing to his crotch. Across that crotch is emblazoned the centerpiece of the entire affair, and perhaps of the entire film: "COMING."

Magic Mike XXL hits theaters this summer, but is that really soon enough? Just look at the caption Tatum served up with his tweet debuting the poster: "Look, but you can't touch...until tomorrow." Screw Fifty Shades Of Grey, this is the shameless pandering to the nation's sex drive that I'm most happily anticipating. It will be absolutely undoubtedly ridiculous, but isn't that half the fun? This is a movie that is calling its sequel Magic Mike XXL. WHAT IS THAT???

That, my friends, is magic.

Of course, this poster begs a ton of questions. Among them:

What Is Channing Tatum's Workout Regimen?

Is it just all those sweet moves?

This seems like an odd stripping fashion choice; why jeans?

The male strippers I've seen have typically been in much...less.

Did Channing Study the Kardashian Instagrams To Prepare For This?

I'm speaking of course about the duck-face. And the glorious shiny skin.

His Neck Is Cold But His Torso Is Not??

In other words: Why the bandanda?

Is That A Comfortable Position To Pose In?

What was the On-Set Direction For This Shoot?

"Yeah, Channing, POINT TO IT! MORE!" Admit it, McConaghey was running this gig.

When Does This Movie Premiere????