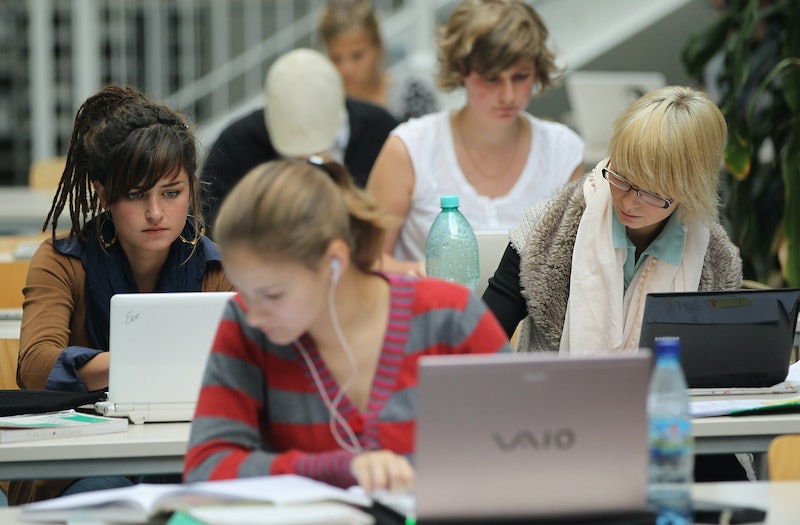 Well what do you know? It's International Online Friendship Day! Didn’t know it was a holiday? It’s OK. As it turns out, there's a lot we didn't know about our Internet relationships — as evidenced by the results of a recent survey conducted by Skout, a social networking app that lets users meet up with new people around the world. The company surveyed more than 52,000 of its users worldwide to uncover online friendship trends from Seattle to Sydney, including 2,600 people based right here in the United States.

I have to say, though, that while the results were entertaining (who knew so many people loved talking about sex online?) (oh wait, duh), some of the other details to come out of the survey — like the fact that more than half of Americans have an online friend they've never actually met before — were surprising... even to a hardened, overly connected Millennial such as myself. I’m curious to know why these trends are happening, and the wannabe psychologist in me can’t help but speculate — what is it about the World Wide Web that makes us feel more open with complete strangers?

(And, look at that, you now have something in common with your new potential online friends also reading this article with a question mark floating above their foreheads. What? It’s true. My first best friend and I bonded in elementary school over our shared confusion of a math problem and everyone’s obsession with light-up sneaks. There’s a real connection there, people.)

So, read on for some titillating, I promise, tidbits on Internet relationships, along with my unqualified commentary, questions, and hypotheses.

1. The majority of the world prefers to discuss their sex life with online friends

Is this for the same reason we're more comfortable confessing to complete strangers on planes and trains, or has 50 Shades unblocked some of our subliminal cookies, if you know what I mean? Or, do forums and comment threads attract natural over-sharers who pressure others to do the same?

Whatever the reason, research shows that nearly 60 percent of Brazilians and Germans and nearly 50 percent of Americans, Brits, Australians, French, and Filipinos say it is far easier to talk about their sex life online than with friends in real life.

2. Women are more likely to have close online friendships than men

Specifically, 56 percent of women in the U.S. who took the survey say they have a close friend they have met online but never in real life, compared to 44 percent of men. Apparently, we girls run the chat room world?

3. We're more honest with our Internet friends than our friends IRL

A whopping 60 percent of respondents in the U.S. said they were more honest with their online friends than with friends they see in person. (I guess if you really want to know what your friends think of you, Google it.)

We're getting closer to saying yes to the universal question, "Can't we all just get along?" The results of Skout's survey show that technology has helped break down geographic barriers and enable friendships around the world: 59 percent of Filipinos, 53 percent of Brits, 48 percent of Australians, 46 percent of French, 42 percent of Germans, 39 percent of Americans, and 33 percent of Brazilians are friends with people who live in another country.

A global FaceTime call, anyone?

5. It’s not just Millennials who have online friends

So, does this mean that it's our turn, kids of the '90s, to give our parents the same warning they gave to us? This time it will be more than just the standard no-sharing-personal-information talk. We'll have to also ask them not to take candy (crush saga invitations) from strangers.