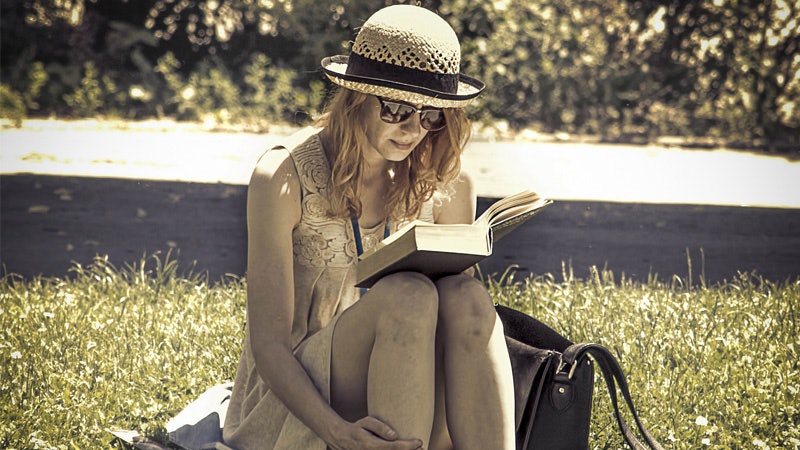 Last January, The Guardian asked, “Will #ReadWomen2014 change our sexist reading habits?” The piece was written by author and illustrator Joanna Walsh, who created the hashtag. #ReadWomen2014 was a simple concept: dedicate the year to reading solely female authors. As shown by the yearly VIDA Count, the literary world, from publishers to journals to prizes, seems in constant need of reminding that women make up half of our writers and readers.

When I learned about the hashtag and its creator, I immediately felt the call to action. I’ve been following the VIDA Count for years. I’ve been thinking, writing, and talking about it along the way, but I wanted a more tangible way to respond. Why don’t we read female authors as much as we do male authors? It’s not that they’re not out there, it’s that the traditional publishing industry has a centuries-old system of suppressing or ignoring them. This challenge seemed like the perfect way to make a statement. By standing up and saying, “I will only read women authors for a year,” I wasn’t saying no to male authors, I was saying yes to the too often ignored women.

So many of the books I read as part of #ReadWomen2014 stuck with me, not because they were books by women, but because they addressed the personal and the universal, they were funny or heartbreaking or courageous, and they were just plain good stories. Isn’t that what we look for in anything we read, no matter the gender of the author? From the many amazing books I read in 2014, five stuck out to me for what they taught me about writing, reading, and womanhood.

Lesson #1: Big Tragedies Can Be Told In Small Stories

Latiolais’s short stories mostly follow the experiences of a wife grieving the death of her husband, a concept close to home for the widowed Latiolais. Her stories are deeply personal and never melodramatic. They touch on the day-to-day aspects of life after loss. When we think of death, we think of it in grand terms, but most of what we experience after tragedy is less dramatic — from grocery shopping to visiting the doctor, and all the other ways we have to return to normalcy. Latiolais is unafraid to admit that we can’t make sense of the senseless. She showed me how writing about tragedy is similar to the way we survive it — it happens in the small moments.

A Spy in the House of Love by Anaïs Nin

I am deeply fascinated with the way women write about the sexual experience, and I owe this to Nin. The female protagonist of her story moves from one man to the next in her quest for meaning or, perhaps more basely, to fulfill her sexual appetite. There isn't shame involved in Nin’s writing, no moral lesson for her female characters to learn about how women should act. She ignores our society’s limiting ideas of female sexual behavior in favor of freedom. She showed me that women should screw as freely as men and they should write about screwing with the same abandon that men always have.

Lesson #3: Don't be Afraid To Write Outside Of Yourself

The most recent of Smith’s novels, NW, follows four intertwining lives in a neighborhood in Northwest London from which the book takes its title. The book is split into four parts, one for each main character. Smith seamlessly switches voices across gender, race, and class lines. She handles structure with easy control, experimenting with different styles and forms as she moves between characters. In NW, Smith shows that creating individualized and believable points of view starts at the sentence level, that how a character says something is as important as what they say. She taught me not to shy away from other perspectives when writing, whether it's a man or a person with a different skin color. If you start with empathy for others, you have the best shot at writing the most honest characters, even if they aren't remotely like you.

Lesson #4: Comedy is as Hard (If Not Harder) to Write as Tragedy

Birds of America by Lorrie Moore

Moore is a writer who elevates the everyday through a mix of comedy and tragedy. The stories within her first collection cover the expanse of the human experience, from friendship to marriage to our relationships with our families. Moore has the ability to take any recognizable subject— celebrating holidays, buying a house, attending a dinner party — and filtering them through her unique lens, which more often than not involves laughing in the face of tragedy. It’s easy to forget that humorous writing has as much value as dramatic writing. I think writing comedy is harder than writing tragedy. Lorrie Moore’s stories made me laugh; I value them for that.

Lesson #5: Some Books Can Break You... And That's More Than OK

Bastard out of Carolina by Dorothy Allison

Allison destroyed me with her coming-of-age story of a young girl in South Carolina who struggles against a world seemingly designed to knock her down. Allison is a mouthpiece for the survivor, giving us a strong-willed protagonist who suffers years of physical and sexual abuse at the hands of her stepdad. I will add this, along with I Know Why The Caged Bird Sings and The Handmaid’s Tale, to the list of books I struggled through, not for lack of graceful writing and captivating characters, but because the subject matter is so painful and the depiction of female suppression at the hands of men is so raw. Not every book you read will leave you feeling light and airy, but this is not a bad thing. Books are meant to entertain. Some have the ability (and the opportunity) to expose us to things that make us uncomfortable, but that we need to address nonetheless.

Sometimes we become so focused on an issue that we develop tunnel vision and ignore other issues. Yes, I did my part reading women, but I could have done more by reading more writers of color and more LGBTQ writers. #ReadWomen2014 served an important role because it acted as the gateway into broader reading habits (I recently finished Kim Fu's For Today I am a Boy and am FINALLY reading Toni Morrison's Beloved). It reminded me that reading is supposed to open you to new ideas and perspectives different from your own. If we only read white American or British male authors, what are we closing ourselves off from? So much!

Reading should never be an “I have to” — it should be an “I want to.” I want to read books by authors whose experiences, backgrounds, and world views are different from mine, and to be open to the tapestry of stories available to me by all genders, races, sexual orientations, religious views, and on and on. #ReadWomen2014 opened my eyes to the possibilities of reading. It was never about saying no; it was about saying yes.