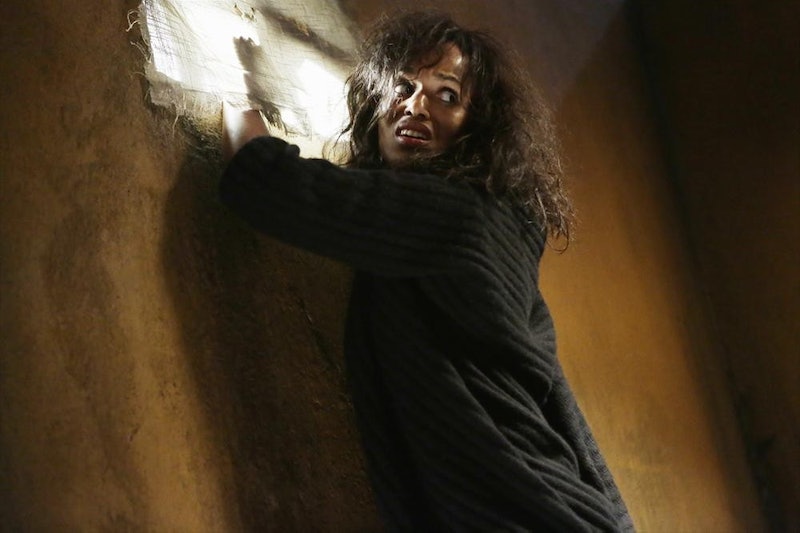 Scandal's midseason premiere proved to be quite the emotional roller coaster for our beloved Olivia Pope. I mean, just when you think you've made a new friend, they turn out to be your captor. (Seriously, not cool, Ian.) That being said, this little revelation proved to be rather telling about who else is behind Liv's kidnapping. Because, let's be honest here, Ian is definitely not running this sophisticated operation alone. He's working for someone. And while many fans (myself included) thought Mellie, Andrew, and the Republicans were behind Olivia's kidnapping, I'm now starting to have some serious doubts.

You see, the main reason Ian decided to fake being a prisoner was so that he could gather intel on this political fixer and see just how important she is to the President. Normally, this would make complete sense (knowledge is power and all that), but shouldn't he already know this information? Otherwise, what reason did he have to abduct her in the first place? So the fact that Ian acted as though this was all some big miraculous discovery makes me think Andrew and the RNC potentially weren't behind this Pope heist after all. Mellie… Andrew… even Rowan already know that Fitz would do anything to protect Olivia. They wouldn't need to manipulate that intel out of her.

So the way I see it is, either the entire episode — which albeit was very well done — was a complete waste of time or it was Shonda Rhimes' way of hinting to fans that the Republicans have nothing to do with this.

Sure, their involvement would've definitely made sense, especially after Andrew basically came out and admitted to Fitz that he'd taken something that the President cares most about. We all assumed that he was talking about Olivia, and even if that's still the case, that doesn't mean his plan couldn't have been thwarted by someone else. Perhaps another group was made aware of the plan and decided to hijack it for their own use. Or maybe this is just the world's biggest coincidence and two separate parties planned to kidnap Olivia on the exact same night. (I doubt it, but you never know in Washington!)

Clearly, we're still missing a few pieces of this puzzle, which will hopefully get cleared up throughout the next few episodes. But as it stands right now, Andrew & Co. are looking less and less guilty. (Well, at least in regards to this. He and Elizabeth are still the worst.) As for who the actual brains behind this entire operation could be, that's difficult to say. On the one hand, I would think Rhimes would want it to be someone we know, given that it would make the reveal all the more shocking. (The woman does love her OMG moments.)

But, on the other hand, it has to be someone we've never seen before, right? I mean, everyone else is completely aware of Fitz and Liv's intimate relationship. (They've never been exactly stealthy about it.) So either Ian was going off-book from his boss or there's a new man/woman behind the curtain with their own unique (and scandalous) agenda.