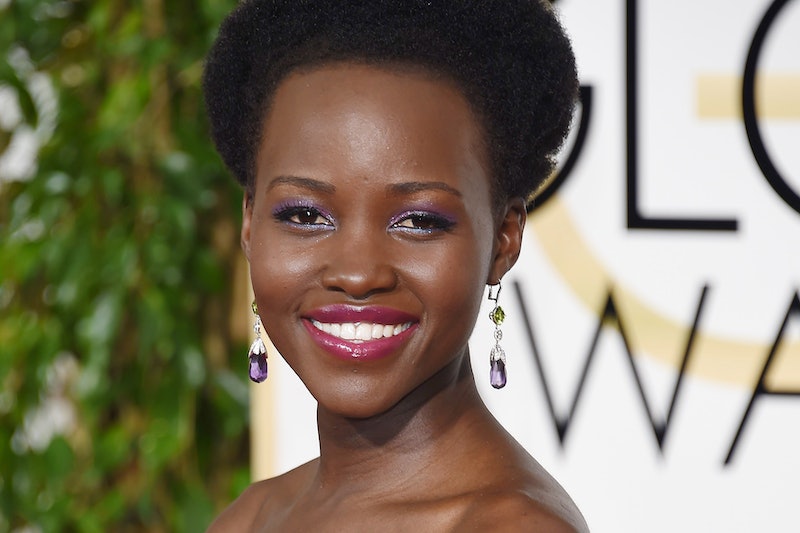 I'm not gonna lie, I'm mostly invested in awards season this year because I know that Lupita will be presenting at all of the major ceremonies (she made waves with Jared Leto at the SAG Awards, and now it's just been announced that they'll both be presenting at the Academy Awards as well). Leto 'shipping aside (for the record, I don't personally 'ship them — she can do better than him, IMHO), she already completely killed it in Giambattista Valli at the Golden Globes (with a definite assist from some crazy-awesome high-impact frames), and won the entire red carpet of the SAG Awards with a high-impact, high-wow factor Elie Saab (again, with some amazing glasses)

Basically, I'm veritably chomping at the bit for the rest of the awards season roll-out so I can continue to admire her red carpet prowess. But to hold us all over until the BAFTAs and Oscars, there's always her recent appearance in a little magazine called Vogue. Yep, she recently posed in the seminal fashion bible in rose gold Zac Posen, and the results are cartoon-style eye-bugging. I think she's got another designer to add to her roster of go-to favorites, eh?

I cannot wait for the Star Wars: The Force Awakens press tour: I mean, I'm excited for the movie too, but can you imagine all the Lupita premiere-going and red carpet-stomping we're going to get out of it? It's going to be flat-out glorious.