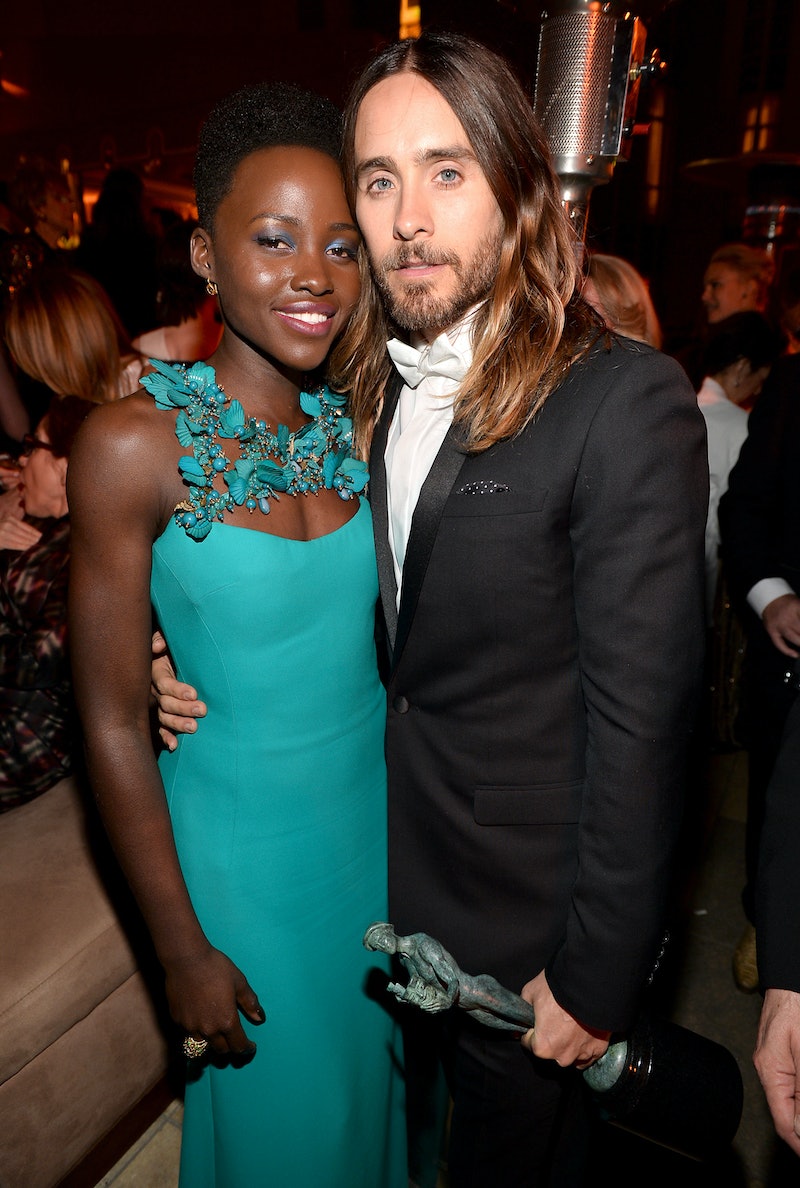 You know what it means when two people laugh together, take some photos, dance like there's no tomorrow, and appear to have great chemistry? It means they're dating, falling in love, and probably getting married. Well, at least that's the kind of speculation that starts when any two celebrities are spotted having more than one friendly moment. For example, rumors started that Lupita Nyong'o and Jared Leto might be dating, because after Sunday's SAG Awards, the two were not afraid to get their flirt on, according to Us Weekly. If true, who can blame them? Have you seen them? One word: gorgeous (inside and out).

Apparently, "Jupita" (yes, that is their shipping name), were spotted getting "very flirty" at a SAG after-party in West Hollywood. Now, according to another source, Nyong'o is no longer with rapper K'naan, so that means there is room for Leto. Others also assume that the two have a thing, because their "chemistry was palpable" while presenting together at the SAG Awards.

According to other eyewitnesses at the after-party, Leto couldn't wait to find Nyong'o and "hugged her and started whispering to her quietly." The two even danced! Per one witness, "At one point they were sticking their tongues out at each other and staring into each other's eyes. It was very flirty. Then Jared said he had to go but he told her to text him later and he ran off."

So, when is the wedding? You know that's what everyone is thinking, because people can't help but jump to conclusions, but maybe Leto and Nyong'o are just friends.

With that said, I'm down with these two dating, because they both have a lot in common — like these few items.

Leto's Referred To Nyong'o As His "Future Ex-Wife"

A relationship becomes more real once you acknowledge it in front of a crowd, right? As Leto showed during his acceptance speech at the 2014 Independent Spirit Awards — where he took home a trophy for Best Supporting Male for Dallas Buyers Club — he thanked Nyong'o and said, "...my future ex-wife. Lupita, I'm thinking about you baby."

They Are Giving Individuals

Leto is no stranger to charity, like that time he donated funds to Haiti. Not to mention, Leto is also vegan and can't help but show love to animals. Nyong'o is also charitable and made 2014's list of "Celebs Gone Good" in the number 16 spot. Those that donate together, date one another, right?

They're Both Fun & Quirky

I think this picture says it all. You can't have a good relationship without fun.

They Inspire Pretty Much All The Time

Did you hear Leto's Oscar acceptance speech? What about Nyong'o's? If their words don't say inspiring and caring, I don't know what does. With all that love and kindness, any relationship can last.

Have You Seen Their Style?

I know fashion can't determine a relationship, but just imagine how amazing they'd look on red carpets. With their attire and amazing hairstyles, yeah, these two would make one beautiful couple and top every best dressed list.

They're Both Gentle Souls

You can just tell by their acceptance speeches (like when Nyong'o cried from happiness and when Leto thanked his mom at the Oscars), they don't have one mean bone in their bodies, or so I assume and hope. Let's imagine them as old and gentle souls together... *swoon*.