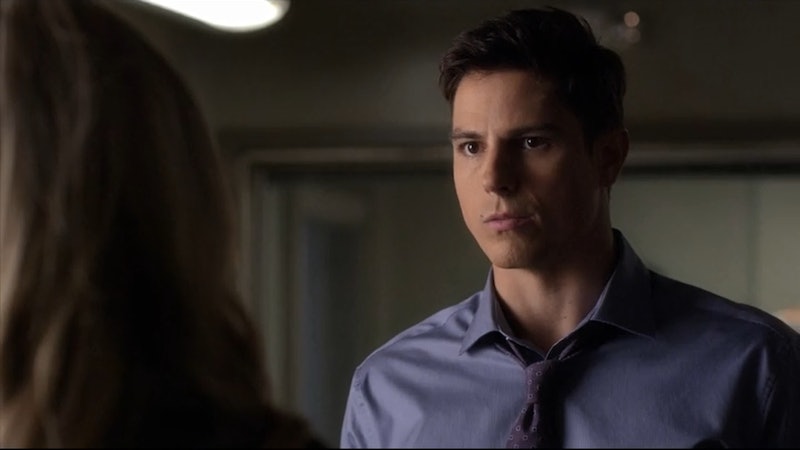 On Tuesday's episode, Hanna confronted Detective Holbrook on Pretty Little Liars, and finally put Rosewood's creepy men in their place. The town's adults have been running wild with little to no consequences for years. And the worst part is that they're usually in positions of power. But when Holbrook tried to make himself look like the victim for being pulled into Ali's plans, Hanna wasn't having any of it.

Perhaps it was the fact that he followed her onto a dark road when she was alone, or maybe it was that he kissed both Ali and Hanna despite how young they were, but Hanna was over it. When Holbrook put his hands on her face in an aggressive way she smacked him away and put him in his place. "You don't get to play the victim here!" she shouted at him. "You're the grown-up police officer. [Ali's] just a girl!"

I literally cheered out loud for her when she said that to him because it's long overdue, and not just for Holbrook. He's far from the first man to make advances on the young women of Rosewood.

There was Detective Wilden who may have been sleeping with teenage Ali. There was Ezra who hooked up with both Ali and Aria when they were underage, and he continued to do so with Aria even when he was her teacher. There were both of Melissa's boyfriends Ian and Wren who made out with underage Spencer. Plus, let's not forget police officer Garrett who was hooking up with Jenna. And, heck, let's even add Aria's dad Byron to the list because he had an affair with his young student when he was a professor.

It's so messed up. And even as much as I love Ezria as a couple, I know it's wrong that they were together when he was her teacher. But none of the adults ever really got in trouble for these things, and no one ever called them on their B.S. until now.

I'm really proud of Hanna for sticking up for herself, and for Ali. No matter what Ali may have done, she was and is just a girl and for Detective Holbrook to play the victim is so wrong. People may view Hanna as the dumb one in the group, but she's pretty smart and brave to call out one of Rosewood's officers. You go, girl.