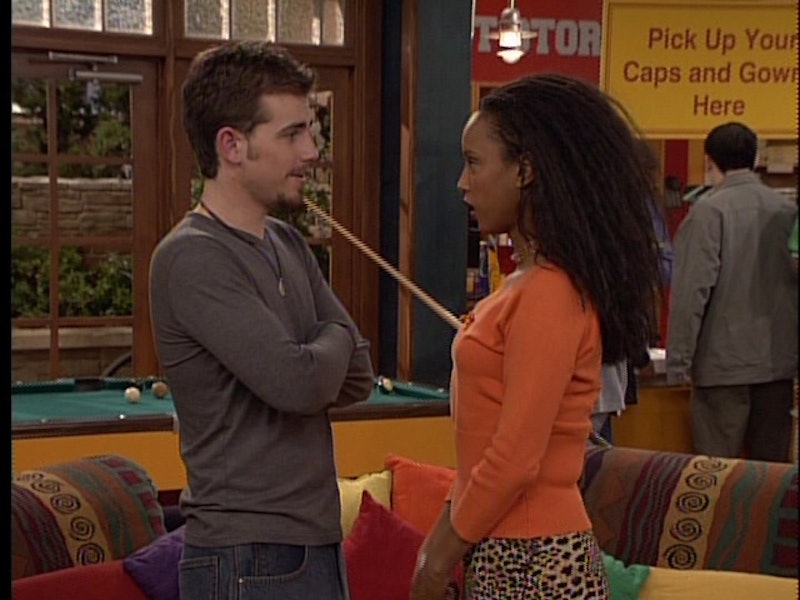 In case you haven't heard the awesome news, allow me be the one to tell you: Angela is making a comeback on Girl Meets World . Yep, it's true! Trina McGee, who portrayed Shawn Hunter's girlfriend, Angela, on the original series is the latest star to reunite with her Boy Meets World cast mates on Girl Meets World, Disney's spinoff of the classic TGIF show — and, as the diehard BMW fan I am, I couldn't possibly be more excited.

As much as Cory and Topanga were always endgame, it seemed obvious that Shawn and Angela would end up together. They were perfect for each other: They came from similar backgrounds, they shared an artistic spirit. But, unfortunately, they ended the show apart, and now that Shawn's becoming more of a regular fixture on Girl Meets World, it's clear that he and Angela's romance never worked out.

But now that she's coming back? That's a total game changer, and I already have a laundry list of things I want to see when Shawn and Angela reunite... and all of them have to do with them falling in love all over again.

Come on, Girl Meets World.You've done so well so far helping me enjoy the nostalgia of my favorite childhood TV show. Don't let me down now!

Angela Has Been Changing The World

Just as Shawn has followed his dream of becoming a writer and a photographer, I want to find out that Angela's been busy living her passions, too. I want to find out that after Angela lived in Europe for a year with her dad, she did something amazing, like becoming a professional poet or traveled the world, dating guys in leather jackets who got into a lot of trouble in high school...all before realizing she has been in love with Shawn the whole time.

Angela Has A Baby... And It's Shawn's

And yes, this is totally plausible if not far-fetched. What if she realized she was pregnant once she made it to Europe and decided to raise her baby on her own and not let the responsibility keep Shawn from doing what he wanted with his life. Now, she's back, to introduce her now teenage child who has grown up to be exactly like his dad. (Wait, this is a Disney Channel show, right? Maybe that won't happen.)

They Fall In Love Again Instantly

They see each other, and even though it's been 15 years, the old feelings come rushing back. That would be so satisfying to watch.

Maybe she missed her BFF, Topanga, and ended up nabbing a job opportunity in New York she couldn't pass up, so she decides to move to the big apple? She becomes a recurring character, her love story with Shawn rekindles, and everyone lives happily ever after. DONE.

More like this
What Is the Net Worth Of Each 'Stranger Things' Season 4 Cast Member?
By Hugh McIntyre
'Friends' Creator Marta Kauffman Opened Up About Misgendering A Guest Character
By Grace Wehniainen
Jesse Tyler Ferguson Had A Funny Run-In With A Fellow ‘Modern Family’ Alum
By Grace Wehniainen
“The Door Is Always Open” For Another 'Breaking Bad' Spin-Off, Says AMC Boss
By El Hunt
Get Even More From Bustle — Sign Up For The Newsletter