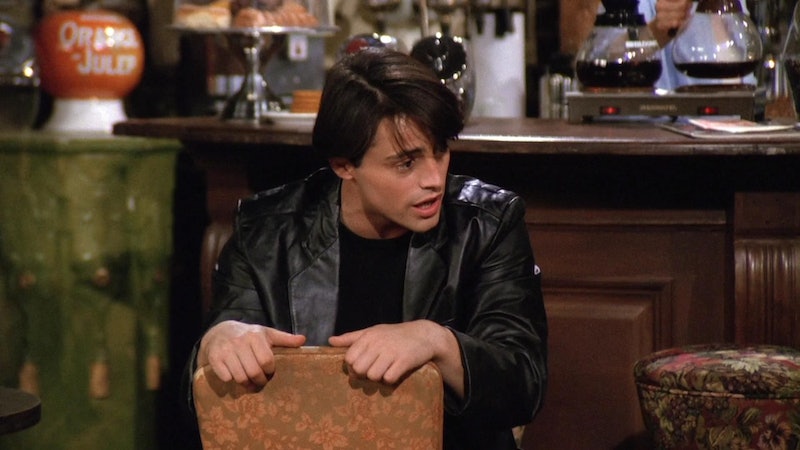 I've seen a lot less of my actual friends since Netflix released the entire series of Friends onto its online streaming platform last month, and I'm not even the least bit sorry. (Note to my actual friends: I'm on Season 8, please still love me when I'm done.) Friends hitting Netflix was a lovely reminder of just how much I adore this series: Watching Rachel, Joey, Phoebe, Chandler, Monica and Ross onscreen is sort of like palling around with a bunch of people you've known for your entire life. (Though, unfortunately, their giant mugs of coffee — not to mention their apartments — come separately.) Creators Marta Kauffman and David Crane created a rare world that fans are always game to jump back into — even if what they originally wrote didn't always match up with what appeared onscreen.

Any fan worth their salt knows that the masterminds behind Friends had a few ideas that didn't make it into the series — like the fact that Joey and Monica were supposed to get together. (Are you cringing? I am totally cringing.) But the original pilot script also had some major differences. I found what appears to be the first draft of the Friends pilot online, and it has some pretty interesting differences from the pilot episode that aired in September of 1994. Here's what changed:

The first draft of the pilot was titled Friends Like Us. Later, the show would be called Six of One before producers locked down Friends as their official title.

The first draft came with this character breakdown. Most of the other characters are pretty on point with who they are over the course of the series — or, at the very least, the first season — but Joey's stands out.

Now, I don't know about you, but I don't know if I would describe Joey as "macho." Maybe Joey would describe himself as macho, but I feel like the five other friends would laugh in his face for saying that. I mean, this is the guy who put a copy of The Shining in the freezer because he was afraid of what was inside the book. Also odd? That there's zero mention of his love of food on this list of traits... even though it's included in Chandler's breakdown. Weird.

Later in Season 1, there's an episode where Ross finally reveals to his parents that not only is he splitting up with Carol, but that she's a lesbian and pregnant with his baby. In the original draft, it's already happened.

Rachel Has A Different Last Name

In the original script, it's Robbins.

In the pilot episode, it's sort of brushed over that Monica didn't get invited to Rachel's wedding to Barry — it's inferred that they just haven't kept in touch very much over the years. The same thing is implied here, but Monica's so not happy about it.

Instead of going to Ross' house to help set up IKEA furniture, Phoebe tells the guys that she has to "go to work" — which then cuts to Phoebe playing music on the subway. In the aired pilot, she simply says that she can't because she "doesn't want to."

Or, rather, it could have — had she not missed the interview. In the original pilot, Rachel gets the opportunity to interview for an assistant buyer position at Bloomingdales — a job that she actually has later in the series. Unfortunately for pilot script Rachel, she misses the interview. Here's her interaction with Joey (he's working as a perfume spritzer in the pilot script!) while on her way through the store.

And just in case you were wondering, yes, she still buys boots.

Read the whole script below: