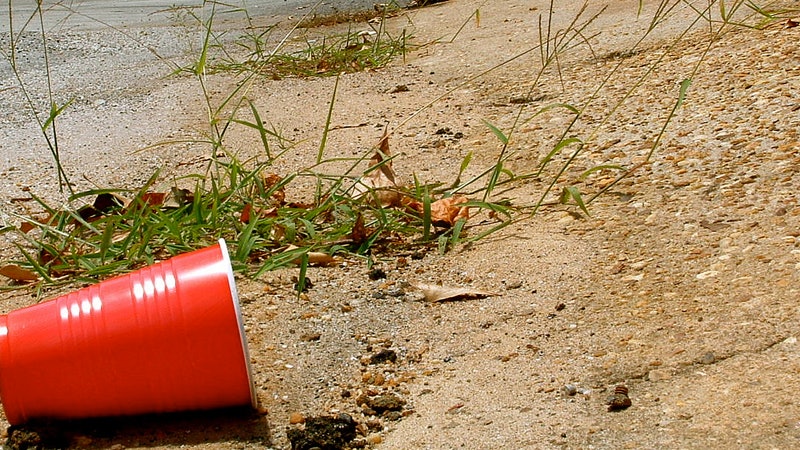 January 2015 was 31 days, and I know because I was been counting them down, one by one. Two weeks left, then one, then none. Finally, after a dark and hopeless 4.43 weeks, I hold a drink in my hand. Yes, that's right: I tried Dry January.

Before taking an entire month off from alcohol, I had a conversation about my decision with my dad on the phone that went a little something like this:

Me: “It’ll be nice to lower my tolerance a bit, be a cheaper drunk.” Dad: “How many alcohols do you usually have in a night?” Me: “Well it depends where I am, who I’m with. No more than three alcohols at a bar, unless someone’s paying or it’s Happy Hour. Sometimes seven or eight alcohols on a big night out.” Dad: “I never have that many alcohols.”

You see, I was coming off a December of heavily medicated Seasonal Affective Disorder (prescription: copious alcohol, self-administered daily). It wasn’t like I was waking up every morning to a game of Edward Forty-Hands, but as my tolerance had yet to decline from Senior Week 2013, I knew I was due for a liquor sabbatical. How long could I last, I wondered? A month?

Perhaps it was this feeling of a formidable challenge, the voice that told me I just couldn’t do it, that made me want to take it on. I challenged myself to a Dry January, alcohol-free — and this is what I learned.

1. It’s possible to go to a bar and not drink, but it sucks.

During January, on the rare instance that I found myself at a bar with friends, I’d order tea, water with lemon, fried pickles — anything but a drink. Sitting at a bar, nursing glass after glass of ice water, I felt like a vegetarian in a meat store. Since I am a vegetarian, I don’t go to meat stores, so why would I go to a bar and not drink? For the atmosphere? I can sit in a dark box and blast Modest Mouse at home. For the company? I love my friends, but they’re so not worth it.

By Week 2, I stopped going to bars altogether.

2. The best hangover cure is not drinking in the first place.

Turns out, there’s a great life hack to avoiding hangovers: It’s not so much about eating a deep-dish pizza, or chewing a handful of Advil, or self-administering a teaspoon of yeast mixed with yogurt for every 16 ounces of beer consumed. It’s actually the alcohol that’s the problem. I know, you don’t believe me. It’s just one of those myths, you say, an old-wives’ tale. But seriously, just try it, and if your hangovers don’t disappear ENTIRELY, then maybe you don’t know what alcohol is.

Life without hangovers was like removing a personal handicap: you're no longer waking up with those weights you strapped around your own head. I felt spry and unencumbered, as much on Saturday morning as on Tuesday — (perhaps this is why I got so much sh*t done in high school?).

If you're looking for another way to unwind without ruining the following morning, here's a great alternative.

3. Your tolerance will decline after abstaining.

I had my first drink in a month on February 1 while watching the Super Bowl. It was the first time in a month that I felt like a real American. Sipping my Brooklyn Lager, I was enchanted. “This is just delicious!” I thought. “It reminds me of kombucha, but better, since it’s giving me this tingly happy feeling!” After two beers, I declared myself clinically drunk. I sent a flurry of texts proudly proclaiming the fact: “FIRST DRUNK TEXT OF 2015 Happy superbowl 2 beers in my buzz is strong and I love you babe Katy Perry firework!!”

4. Cutting out alcohol can indeed promote a healthy lifestyle.

Have you ever read The Power of Habit by Charles Duhigg? I haven’t either, but my mom has referenced it so frequently that I feel like I have. Apparently, there is such a thing as a “keystone habit,” a habit that acts as a catalyst encouraging the formation of other behaviors. Though I’m not one to discredit the potential health benefits of alcohol (I maintain that a Bloody Mary is a vegetable), giving up drinking did start a chain reaction of healthy habits for me.

I was no longer mysteriously craving onion rings after 9 p.m., and I found that waking up at 8 a.m. was indeed possible. I took up weighted hula hooping and drank copious amounts of green juice. I didn’t even know myself anymore.

5. You may discover new hobbies.

I became disenchanted with bars, far too jealous of the happy laughing people surrounding me. I thought that it might be fun to watch my friends transform into drunken fools at parties, but I mostly regretted not being drunk in those situations. So during the month of January, I funneled some energy into wholesome activities, such as painting my walls, learning a Chopin waltz, anti-stress coloring, and hula hooping. I hung out with some cool people who could both bear my sober personality and a sober evening. I learned a new variety of Bananagrams and an infuriating card game about bean farming.

Since I no longer had to reserve designated hours for inebriation, nor the additional hours it took to recover, I found myself with a lot more productive time on my hands. Too much time. When I started to feel a bit too productive, I started watching Scandal, because everybody always raves about it. Ever since then, I’ve been extraordinarily useless.

6. Sober dating is uncomfortable — in a good way.

It was around Day Three that I went on a sober date. Halfway through Selma, after witnessing a good eighty-five minutes of the brutality and injustices surrounding the Civil Rights movement, I was definitely jonesing. This was a date for god’s sake, and what date survives without alcohol?

As it turned out, we ended the night with dumplings instead of drinks. Though I could’ve used the liquid courage (I believe myself to be highly impressive after five alcohols), it was kind of fun to go on a completely sober date. Like dating when you're 16, I felt like a schoolgirl. I experienced the full brunt of my nervousness and became an uncontrollable giggler.

Multiple dates ensued, and I came to embrace my awkwardness and shed some self-awareness. Sober dating felt a lot like an extreme sport, kind of like free climbing.

6. All of your friends will forget.

My friends would invite me out for drinks and then catch themselves: “Let’s get a dr — oh wait.” “I’ll bring a bottl — oh wait.” What are we possibly going to do that doesn’t involve drinking? Play Apples to Apples and eat all of the opaque-flavored Jelly Beans? For anyone who doesn’t drink for whatever reason, more power to you for putting up with the consternation of your drunk friends.

7. Passing up free alcohol is hard.

The first time I refused a free drink, I felt like a titan of willpower. I actually had the ability to turn down free alcohol, like some sort of X-Men mutation. The fourth time, though, I felt like an idiot. I’d turned down a wine tasting, Bloody Marys at a birthday party, an open bar. And at a free Bottomless Boozy Brunch, where I could’ve ridden a lazy river of mimosas to the sunny banks of a Drunken Afternoon, I had water and coffee. And for what? The dumbest experiment ever? I was kicking myself.

8. You will feel powerful.

As a wise yoga instructor once said, “There is strength in completion.” Days after January came to its merciful end, looking back on this wild and crazy month with a glass of Tempranillo in my hand (I found a pretty solid $8 bottle), I feel powerful, like Olivia Pope. If I can give up alcohol, I can get elected into government, have an affair with the president, and start wearing designer loungewear.

I proved to myself what I set out to prove: that drinking didn’t have to be a default, that I could go without weekend poison and social lubricants, and if I wasn’t in the mood to feel like sh*t the next day, sobriety was a great option. My mom even told me she was proud of me.

9. You might remember why you liked alcohol in the first place.

I’ve ended a Dry January and started a Wetter-Than-Usual February. I’m welcoming back all the things I love about drinking: the spontaneity of nights out, the welcomed loss of inhibitions, and how there sometimes exists in a glass of red wine 6 ounces of respite. I'm ready to spend all of the money I saved on alcohol last month, this month. You’re not supposed to give up on the things you love.

(Unless, of course, you think you might have a drinking problem. That's a whole other thing, and you should get help for it.)