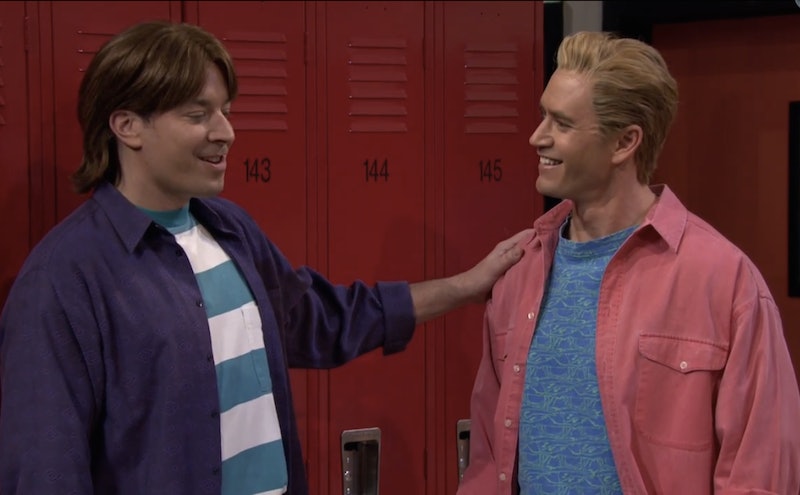 Drop whatever you're doing on this fine Thursday morning and prepare to lose your freakin' minds. Jimmy Fallon did it, you guys. He finally, finally did it. On Wednesday's taping of The Tonight Show, Fallon got the cast of Saved By the Bell back together for an eight-minute sketch that is currently making the Internet go wild with nostalgia and feels and general screaming. If you weren't watching Saved By the Bell in the '80s and early '90s, then clearly you just have no soul. How beloved the show was is obvious in the way that it's been trending on Twitter all Thursday morning, because no one can handle seeing Zack and Kelly and Slater and Jessie and even Mr. Belding all back in one place. I know I can't.

It's hard to pinpoint a single best moment from the eight-minute scene because there is no such thing as a single best moment in this case. The whole thing was amazing. Epic. Legen...dary, even. It's the kind of sketch you need Neil Patrick Harris' Barney Stinson to pop out from under your bed to describe for you, is what I'm saying. It was hard even narrowing the best moments down to these 14, but somehow I managed. If you want to get nostalgic about this nostalgic clip, scroll through these moments below.

2. When They Mocked The Theme Song

3. When Slater Dimpled At Us

You could pour water in that dimple.

4. When Jessie And Her Hair Came Bouncing Down The Stairs

5. When Slater And Jessie Were Beyond Cute

6. Everything About This Moment

I think back then they were just called phones.

8. When Jimmy Revealed His Dream To Date Nicole Kidman

9. When Jessie Was No Stripper (Or Was She?)

10. When No One Had Ever Been This Excited

Not that I'm complaining.

12. When Zack And Kelly Out-Cuted Slater And Jessie In Two Seconds

13. When Zack Called A Time Out

14. His Reaction To Kelly's Surprise News

Check out these moments and more in the sketch below.