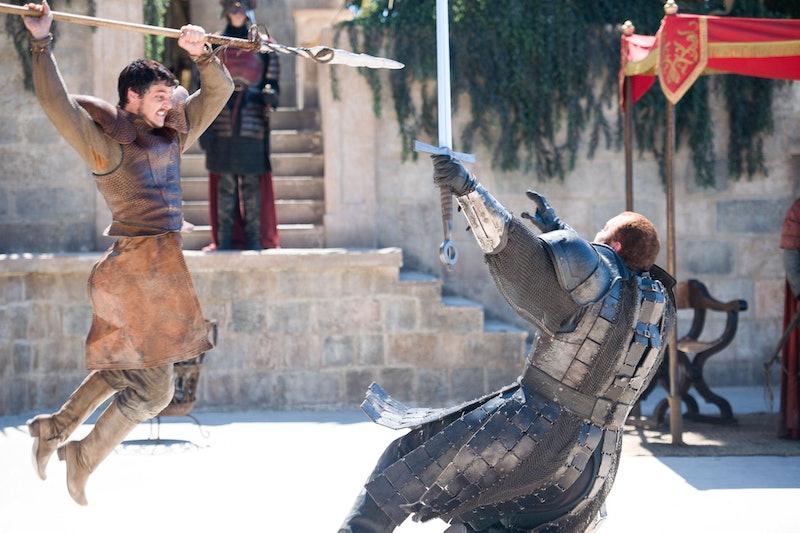 Things are starting to ramp up for Season 5 of Game Of Thrones , HBO's epic fantasy drama: last week the premium network unrolled an unprecedented IMAX screening of the final two episodes of Season 4, and this Sunday they're unveiling a half-hour special titled A Day In The Life . Airing at 7:30 p.m. ET, the program will be a "documentary that covers one day of Season 5 production on three different Thrones sets in three different countries: Belfast, Northern Ireland; Dubrovnik, Croatia; Sevilla and Osuna, Spain. The special follows key crew members and promises to highlight “the epic sets, renowned cast and global scale of Thrones, as well as the more intimate and individual challenges of our subjects, giving the audience a new perspective on one of the most elaborate productions in television history."

As if all that wasn't enough for you, a Redditor just leaked a photo of George R.R. Martin's original outline for his proposed Song Of Ice And Fire trilogy. That's right, trilogy. Take a gander if you want to know what the author's initial plan for the series was... spoiler alert, it's very different. (We're talking Jon Snow/Arya/Tyrion love triangles and Dany invading Westeros with her dragons in Book Two. Book Two!!)

All of this is to say, it's time to bone up on your knowledge of the Seven Kingdoms so you're sure to be prepared when Season 5 premieres Sunday, April 12. With so many major characters biting the dust in Season 4, the easiest way to recap the season is simply to use those deaths as milestones. Here's all the carnage that we witnessed last year. (Spoilers ahead, obviously.)

After fleeing the Red Wedding, where both her mother and brother were slaughtered by the traitorous Freys, Arya Stark and Sandor Clegane (aka The Hound) became the unlikeliest of road trip companions. He carried her around Westeros, hoping to collect a bounty from any living relative who might pay to ransom her. At the end of the Season 4 premiere, the frenemies found themselves in a tavern filled with Lannister soldiers, including Polliver, the man who stole Arya's sword Needle and used it to kill Lommy way back in Season 2. The Hound killed most of the men while Arya steals back Needle and used it to dispatch Polliver. It was simultaneously thrilling to see the young girl get her revenge and also disturbing to watch her take another step down the road to becoming a cold-blooded assassin.

Viewers were baying for some Lannister blood to be spilled ever since conniving patriarch Tywin planned the Red Wedding. We didn't have to wait long, when Joffrey was poisoned at his own nuptials, which became known as the Purple Wedding. (He had just married Renly's widow Margaery Tyrell.) The sadistic boy king died a satisfyingly gruesome death in his mother's arms. Margaery's grandmother Olenna, the Queen of Thorns, later informed the twice-widowed woman that she was behind the poisoning; she dispatched Joffrey to pave the way for the more docile Tommen to take the throne and become Margaery's husband.

Theon's torture at the hand of Roose Bolton's bastard son Ramsay Snow continued in Season 4, going so far as to strip the Greyjoy of his identity, whereupon his captor renamed him "Reek." When Theon's sister Yara came to the Dreadfort to rescue him, he was so far gone that he refused to leave captivity. Yara declared Theon dead for all intents and purposes. Ramsay then ordered Reek to "disguise" himself as Theon Greyjoy and go to Moat Cailin, where Greyjoy soldiers were preventing Roose from returning to the North. Reek-as-Theon convinced the soldiers to surrender, promising them safety... so of course Ramsay slaughtered them all. Roose returned home and rewarded his bastard by legitimizing him and bestowing the ruined Winterfell upon him.

Littlefinger Pushed Lysa To Her Death

Petyr Baelish helped Sansa Stark flee King's Landing after Joffrey's poisoning, knowing that the king's ex-fiancée would be accused of having had a hand in the Purple Wedding. He revealed that he helped Olenna Tyrell plot Joffrey's death and takes Sansa to the Eyrie, where he has wooed and married her aunt Lysa, Catelyn's sister. But Littlefinger has more desire for his former flame's daughter than he did her aging sister, so Lysa became jealous... and when she saw her husband kiss Sansa, she threatened to throw the girl out the Moon Door. Petyr interrupts and, after Lysa reveals that she — not the Lannisters — is the one who poisoned her husband Jon Arryn at Petyr's urging, Littlefinger shoves her out the Moon Door. With Lysa's death, Lord Baelish and Sansa Stark become rulers of the Vale of Arryn.

Oberyn Was Crushed By The Mountain

Easily the best new character of Season 4, Prince Oberyn, the Red Viper came to King's Landing from Dorne in pursuit of vengeance for the murder of his sister, Elia Martell. (She was Prince Rhaegar's wife and was slaughtered along with her infant children when Tywin Lannister and his army sacked King's Landing during Robert's Rebellion.) When Tyrion was accused of poisoning Joffrey, he found his chance: Tyrion demanded a trial by combat, and Cersei declared Ser Gregor Clegane, The Mountain, as her champion. Since Oberyn knew Gregor killed his sister, he volunteered to be Tyrion's champion. During the combat, Oberyn wounds The Mountain with a poisoned spear and has almost won... but his desire to hear Gregory confess to Elia's murder proved to be his downfall, as it gave The Mountain the opportunity to trip The Viper and crush his skull with his bare hands. Ouch. (Of course, Gregor currently lies in the dungeons dying a painful death from Oberyn's poison, so there is some justice in the world.)

Season 4 culminated with a giant battle at the Wall between the wildlings, led by Mance Rayder, and the men of the Night's Watch, led by Jon Snow. Though Jon managed to repel the invaders (including giants and mammoths) for one night, the battle was not without casualties: two of his closest friends, Grenn and Pyp were killed (by a giant and by Ygritte, respectively); and Jon's wildling lover Ygritte fell to an arrow from young Ollie, who thought he was saving Jon from a foe. The next day, Jon — knowing the Wall couldn't withstand another attack — volunteered to go out and treat with Mance face-to-face... hoping to find an opportunity to kill the King Beyond The Wall. But their talks are interrupted by a charging army... it's King Stannis Baratheon, along Ser Davos Seaworth, Hand of the King, and Lady Melisandre, the red priestess. Stannis's army decimated the wildlings, and they take Mance captive.

Jojen Was Stabbed By A Wight

Bran, along with gentle giant Hodor and siblings Jojen and Meera Reed, finally arrived at their destination beyond the Wall: a giant weirwood tree where the "three-eyed raven" of Bran's dreams supposedly resides. But just before they could reach it, an army of wights erupted from the snow around them and almost killed them all. Although one stabbed poor Jojen to death, a creature emerged from the bowels of the tree and saved the rest of them. She's one of the Children of the Forest, an ancient race of magical beings, and she took Bran to meet an old man entwined within the roots of the Heart Tree, who promised to teach Bran to fly.

Season 4 saw Daenerys Targaryen conquer the slave city of Meereen and then immediately postpone her plans to invade Westeros, preferring to stay in Meereen and teach herself to rule before going to reclaim her rightful kingdom. While in Meereen, Dany and one of her soldiers, Daario Naharis, began an affair. She also learned of the fact Jorah Mormont, one of her most trusted advisors, had been spying on her for Robert Baratheon when they first met. Despite the fact that he has been loyal to her ever since, she couldn't forgive his betrayal and banished him. In the finale, a Meereenese goat-herder approached Khaleesi with the bones of his young daughter, who was burned and eaten by one of Dany's dragons, Drogon. The queen was forced to admit that her dragons are outgrowing her control, and — though Drogon has flown out of her reach — she chained Rhaegal and Viserion inside the dungeon of her palace.

Wanting to hold true to the vow he made to Catelyn Stark when she set him free, Jaime Lannister dispatched Brienne of Tarth to seek our Sansa and keep her safe. He gave her his new Valyrian steel sword, which she named Oathkeeper. Tyrion's squire Podrick Payne accompanied her on her quest. Though she didn't find Sansa, she came across The Hound and his captive... who she quickly realized was Arya Stark. Sandor and Brienne engaged in a duel over possession of Arya, which Brienne won, sending The Hound over a cliff, shattering his leg. But Arya hid from Brienne and she and Podrick left frustrated. Sandor begged Arya to put him out of his misery, but she refused, leaving him to die alone and in pain.

Tyrion Got Revenge On Shae & Tywin

Unable to see his own little brother executed for a crime he didn't commit, Jaime released Tyrion from his cell with the help of Lord Varys. But Tyrion made a small detour on his way to safety and finds his way to his father's bedchamber... where he finds his former lover Shae in Tywin's bed. Enraged at her betrayal (she testified against him at court), he strangled her to death. He then took a crossbow and confronts his father where he sat on the privy. Tywin tried to talk his son down, but Tyrion shoots him. "You are no son of mine," Papa Lannister spit before Tyrion shot him again, killing him. He then fled with Varys on a ship bound for Essos, across the Narrow Sea.