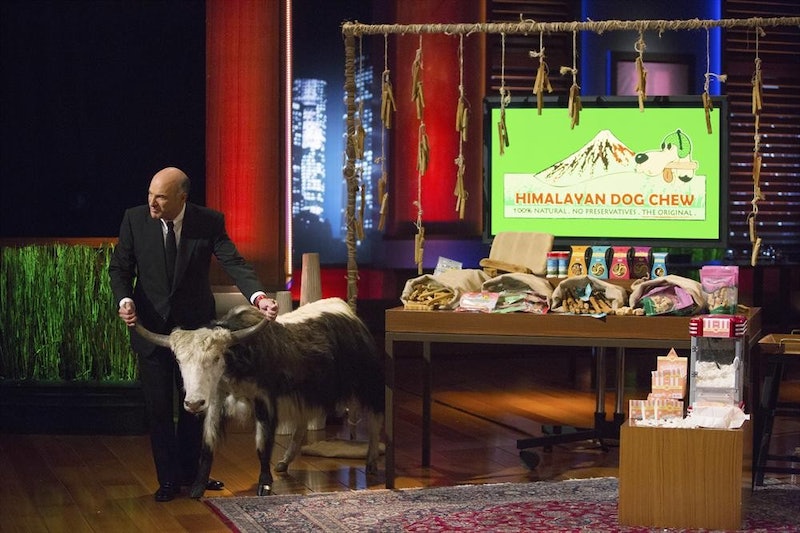 Dog owners, can I get an "amen" that you want to give your dog the best in life? From toys, to cuddles, to fancy dog treats, the sky is the limit when it comes to spoiling your pup, and in return you get the unconditional love only a dog can give. Even though it probably makes no difference to my dog, I want him to feel like he is living the luxe life, and sometimes that means giving him healthy, all-natural snacks so his little dog tummy can dine like a king. That's where Himalayan Dog Chew comes in, courtesy of Shark Tank .

From just the name, Himalayan Dog Chew, you might think, "whoa fancy," and that'd be exactly right. Well, actually they're extremely simple and straight-forward, but when it comes to dog treats, that's pretty much the best thing you can be serving your canine. Himalayan Dog Chews boast a reputation of 100 percent natural, no preservative snacks for your dog that are made from yak and cow milk, salt, and lime juice. Super simple and, for the gluten intolerant dog, gluten-free!

The Himalayan Dog Chew provides endless hours of chomping for your dog, since the dog needs to gnaw the chew for a while until it starts to soften, which Himalayan Dog Chew calls "high-quality eating entertainment," something you probably didn't even know existed for a dog — or anyone for that matter. Another plus for Himalayan Dog Chew is that they work with roughly 3,000 farmers in the Himalayas, and train them to produce the dog chews. The company also boasts that they pay the farmers promptly for their hard work. The chews are also made in humane ways, as the yaks and cows who are milked for the chews are milked in traditional ways — no machinery — and graze in pastures where they are fed all-natural diets.

The company, which is out of Seattle, now produces enough Himalayan Dog Chew products to distribute to 5,000 retailers, so they're obviously doing well. And dogs seem to love it.

Where to Buy Himalayan Dog Chew

If you're eager to run off and buy the Himalayan Dog Chew in stores, let's go over where you can get it. Go to Himalayan Dog Chew's website and search by city (or zip code) to find a retailer around you. For the most part, small pet stores sell the product, but not any chain pet stores yet. Oddly enough, you can buy Himalayan Dog Chew products at REI, the outdoor and recreational store... because dogs can be sporty, too.

You can also buy the products online, at online retailers like Amazon and PetCo (at PetCo, the reviews are 4.7/5 paws, so that's a good sign, right?). So if you've been looking for a way to spoil your dog, because come on, they deserve it, a Himalayan Dog Chew just may be the perfect reward.