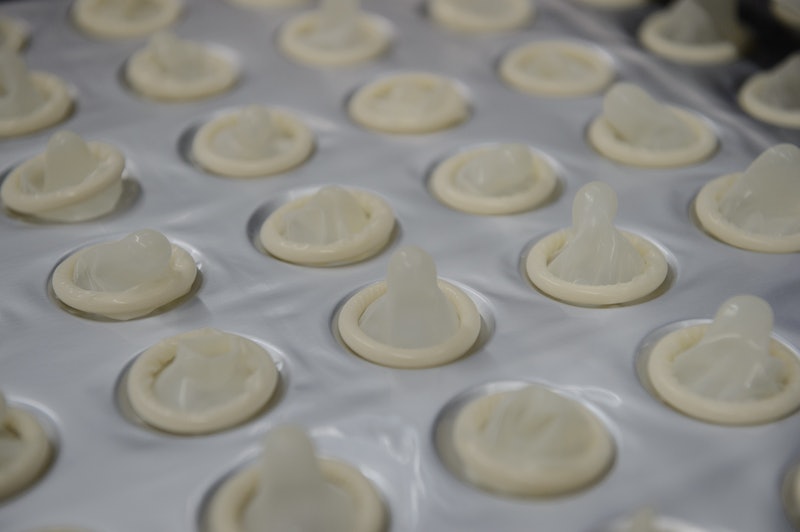 Trying to find the best deal on condoms isn't an unusual problem — but it takes on more significance in some countries than others. Right now in Venezuela, a 36-pack of condoms costs $755. So "finding a deal" probably has a very different connotation.

Due to the collapse in global oil prices, the Venezuelan economy has been in big trouble lately, with citizens standing in long lines for basic products like sugar, chicken, and medicine. And now it seems condoms have been added to the list of products experiencing massive shortages. On the website MercadoLibre where Venezuelans can buy goods that are in short supply, a box of 36 Trojan condoms is currently listed for the outrageous price of 4,760 bolivars, or about $755 USD. The Venezuelan monthly minimum wage is 5,600 bolivars.

Of course, there's always the black market, where, if you're one of the lucky few with access to American cash, you can find a box of Trojans for about $25. But since most people obviously don't have foreign currency just lying around, not many are lucky enough to take advantage of the deal. If we're going to consider $25 for a pack of condoms a lucky deal.

Like I said, finding deals is very different in this context.

The condom shortage is particularly troubling given Venezuela's already high teen pregnancy rate and HIV infection. “Without condoms we can’t do anything,” Jhonatan Rodriguez, general director at the not-for-profit health group StopVIH, told Bloomberg. “This shortage threatens all the prevention programs we have been working on across the country.”

Venezuela has the third-fastest rate of HIV infection in South America, and the second-highest rate of teen pregnancy. Abortion is illegal in the country, and many fear the condom shortage could lead to an increase in deaths as desperate women seek out underground clinics. It can also result in untold numbers of girls and young women forced to leave school or work, negatively impacting their education and careers.

Supplies of other forms of birth control and emergency contraceptives are also growing alarmingly low, Bloomberg reports. Given the condom shortage, I can only imagine that problem will only get worse.

The ability to control one's reproductive destiny is an essential right, one that women and girls everywhere need if we are to lead healthy, independent lives. The fact that this right can be thrown into jeopardy due to the shifting whims of the global market is both tragic and terrifying.