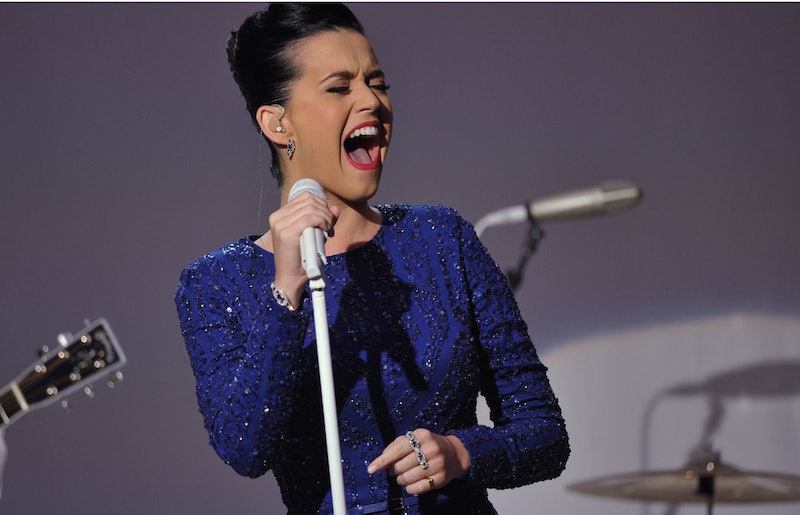 If your thumbs are still sore from playing the Kim K: Hollywood iPhone game, you're going to love what the app designer is tackling next. According to Billboard, the next celebrity we'll get to (virtually) hang out with is none other than Super Bowl superstar Katy Perry. According to Billboard, Glu — the company behind the ridiculously profitable Kardashian app — will incorporate Katy Perry's voice and likeness into an iPhone game, just as they did with their 2014 Kim Kardashian game. The game is scheduled to launch sometime in the second half of 2015, and I couldn't be more thrilled — mostly because there is just so much potential for a Perry-centric app.

Bustle has written extensively about Kardashian's app, and anyone who has played it for longer than 10 minutes knows how easy it is to get hooked, whether or not you openly admit to being a fan of the Kardashian empire. If a game that features a celebrity many people profess to dislike — or, at the very least, a celebrity many people claim to be exhausted with — can be so wildly popular, then Perry's game might be even more addictive. I mean, Perry took on the Super Bowl and the world roared — it seems like the world might also love her app.

Though we don't know very much about Perry's app yet, if it's anything like Kardashian's game, it'll feature elements from her real life. So what do I want to see in the Perry game? Here's what needs to show up in Glu's new app... code away, folks.

Every good celebrity app needs some sort of frenemy, and Swift — allegedly Perry's nemesis ever since Swift penned her tune "Bad Blood" about the singer — fits the bill. Could "Saylor Tift" be your Willow Pape in the Katy Perry game?

So much John Mayer

Who knows what Perry and Mayer's deal is in real life — I can't tell if they're friends, friends-with-benefits, or about to walk down the aisle and buy a house in Vermont. But whatever their deal is, Perry should totally include him in the game — perhaps as a "mentor" for your character, a struggling singer looking to make it big. Just don't, like, hot tub with him or anything... that's probably how you lose points.

I've never wanted to hug Perry more than when I watched her Part of Me concert documentary. Watching her crumple up into a tiny ball backstage due to all of the things that Brand put her through was heartbreaking. Sure, maaaaybe there are two sides to this story, but if this is Perry's game, you better believe that there's going to be an ex-boyfriend character determined to throw you off of your game. Click wisely, friends.

If the point of Perry's game is to move up to the A-list — or some similar feat — you best believe you're going to ride on the coattails of other famous musicians. Kanye West comes to mind... if you can impress him enough with your skills. (You might have to pay for those, FYI.)

It's Left Shark's world now, we're all just living in it. And he has to be included as a BFF in the game.