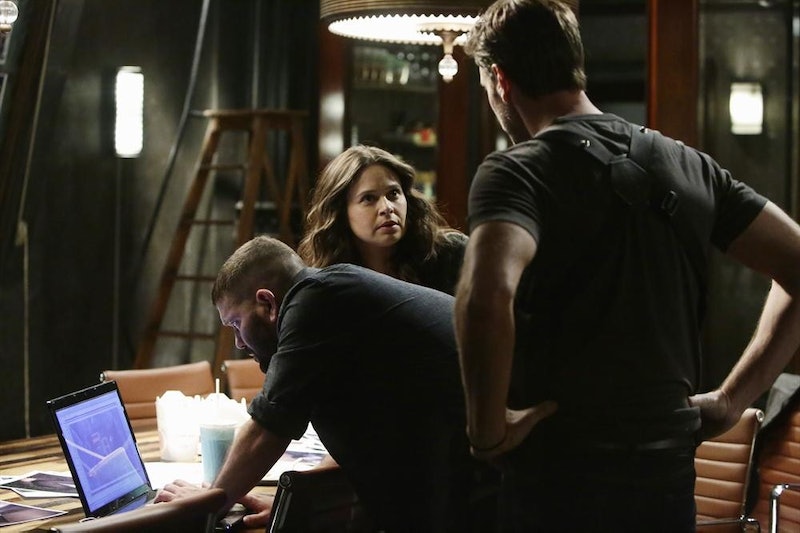 The world's best fixer and the president's biggest weakness is being auctioned off on the open market, but who will win the auction for Olivia Pope? Will it be a foreign ally? A foreign enemy? A secret spy group like B6-13? A terrorist organization? Or worse yet — a corporation? Or will the president of the United States manage to swoop in with his enormous bank account and possibly whole sections of the American budget to win her back — literally.

And of course, it is also possible that Jake, Huck, and Quinn will manage to locate Olivia and rescue her before anyone can get their hands on her. This is obviously a far superior option, and not just because Jake is vastly superior to Fitz.

Personally, though, I am rooting for a third option, one that makes for a much more unexpected twist: That Olivia Pope will manage to outsmart Ian and get herself free somehow. Because let's be real; this is the woman who can keep it together in the midst of actually being kidnapped after watching someone get murdered and being smuggled out of her apartment with a dead body. And now she is no longer locked up. She is no longer scared. She is taking control of the situation, sitting on a private plane in a power suit. And if you don't think she's playing her own game, you don't know Olivia.

So far, both Ian and Olivia have proven themselves capable of manipulating each other — Ian when he made her believe he was a fellow prisoner, and Olivia when she convinced him to go alone with her auction idea. However, even though Ian might seem to be holding all the cards right now, he's also cocky. He thinks he has the upper hand and that as long as he knows what Olivia is up to, she won't be able to pull anything. And that might be all the window Olivia Pope needs. After all, she managed to leave breadcrumbs for Huck and Jake to find right under Ian's nose. With more resources and more chances within reach, who's to say she won't manage an outright escape?

So will she manage to turn the tables? Will she be saved, whether by a friendly bidder or a daring rescue? Or will she find herself captive to someone else?