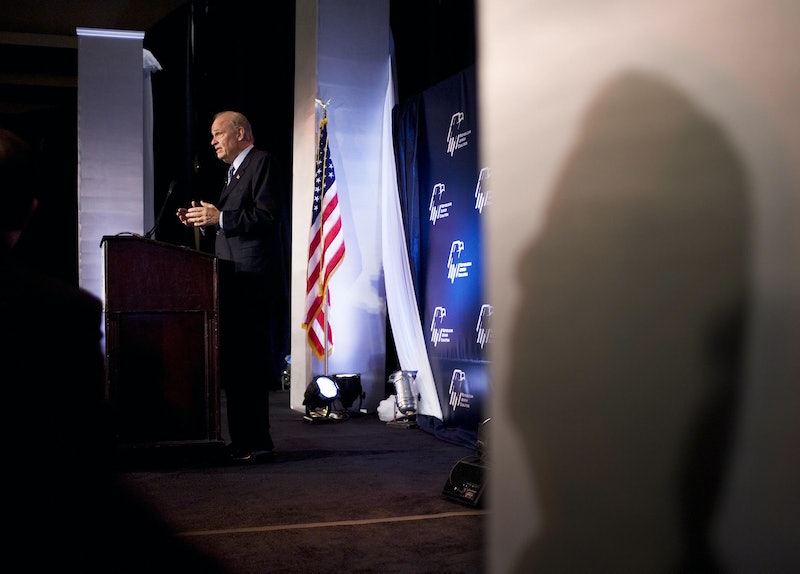 Ever wonder what it's really like to be a member of Congress? An anonymous Vox article by a member of Congress on Wednesday offered up "9 secrets from the inside," although the member in question refuses to unveil their name, state, or party affiliation. "The public pretty much hates us," he or she begins, noting that Congress polls lower than Nickelback (though it does beat Ebola and the Kardashians).

He or she goes on describe why it's difficult to find the "best and brightest" to run for public office — the job is "repulsive," he or she writes, describing it as life "in a fishbowl with 30-second attack ads." Regarding gerrymandering in the electoral process, the member bluntly states: "Rather than the voters choosing us, we choose the voters." Wow.

The anonymous member goes on to tell us what any casual observer knows: party lines dictate vote outcomes.

If a member of Congress doesn't vote with his or her party 99 percent of the time, he's considered unreliable and excluded from party decision-making. Gone are the days when you were expected to vote your conscience and your district, the true job of a congressperson.

So, we might preach against children overcoming peer pressure in school, but apparently it's too hard of a task for our representatives.

Not everyone is feeling the insider account. Disgraced former congressman Anthony Weiner — perhaps he is better known as the guy who doesn't know how to use Twitter — tweeted his reaction:

Weiner later responded to a follower about the piece, saying “God what dreck."

The anonymous member went on to discuss how committee assignments are a front door to a high-paying lobbying job after retirement.

Congress is no longer a destination but a journey. Committee assignments are mainly valuable as part of the interview process for a far more lucrative job as a K Street lobbyist. You are considered naïve if you are not currying favor with wealthy corporations under your jurisdiction.

In short, he's saying Congress serves as an entry-level job in the lobbying industry.

The member later gets super-whiny when it comes to campaign cash and salary.

The idea of spending half your life begging rich people you don't know for money turns off all reasonable, self-respecting people. That, plus lower pay than a first-year graduate of a top law school, means that Congress, like most federal agencies, is not attracting the best and the brightest in America.

The salary of Senators and Representatives not in leadership positions is $174,000. Sure, a Harvard Law grad might make more, but the most recent data from the U.S. Bureau of Labor Statistics lists the annual average wage of Americans at $46,440. The member admits that the position doesn't attract the best and is "only a part-time job," so, really, should they really be making that much?

The member is also apparently tired of how the American people fuss over Congress, delivering a rather interesting analogy about the legislature's role.

Discouragement is for wimps... Get over your nostalgia: Congress has never been more than a sausage factory. The point here isn't to make us something we're not. The point is to get us to make sausage again. But for that to happen, the people have to rise up and demand better.

Yes, the American people do deserve better, and the only way that will happen is if political leaders have the courage to do them that service. This isn't asking a lot, considering that it's their job. This post might provide a candid account of life inside the Capitol, but what we need is open and public honesty from our elected leaders.

If we want effective policy, the American people shouldn't be the only ones rising up; members of Congress need to demand better of themselves. This post only exemplifies what's gone wrong with our members — talk, but no actual action.