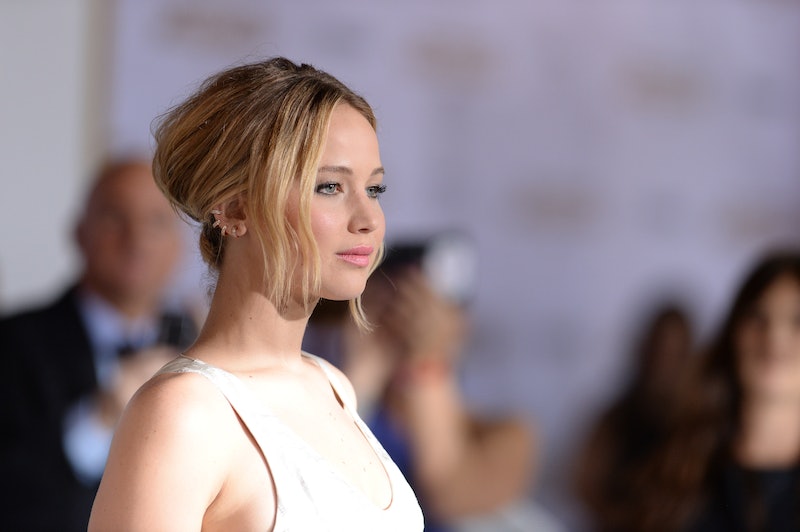 Remember that time Jennifer Lawrence took a picture and it wasn't amazing? No? Me neither. And yes, this includes pictures with any and all deadly reptiles that could possibly swallow her whole. You see, Jennifer Lawrence did a nude photo shoot with a boa constrictor for Vanity Fair, and she somehow made it look fashionable. Although don't get me wrong, I don't think I'll be shopping for a boa constrictor to incorporate into my spring wardrobe. I'd rather my garments not terrify me, which is why I don't wear jeans.

Anyway, Vanity Fair put forth this exotic and edgy picture, heading the article with the title "The Story Behind Jennifer Lawrence's Snake Photo." Who wouldn't that headline draw in? But alas, it was all about the massive snake who apparently has a big ego (cool it down, dude), rather than J. Law. Though they did mention that the Hunger Games actress didn't like it so much, "when the snake took a fancy to her neck." Uh, yeah, I don't think I would have liked that very much, either. But, other than that, they assured us that the actress was cool with the whole snake draping his scaly self over her naked body thing.

But really, how cool could she have been? This is J. Law we're talking about, people. And you know as well as I do, that despite her calm appearance she had a lot of thoughts floating around in that beautiful mind of hers.

Here's what J. Law was probably actually thinking during the snake photo shoot:

Is this snake going to poop on me?

Can snakes even poop?

I wonder what the snake's lunch plans are after this...

It's sort of rude that I'm calling him "the snake." Does he have a name?

Is this what Harry felt like in the Chamber of Secrets?

Oh! I'll call him Salazar, because he was the founder of Slytherin. It's got a ring to it.

No one at this photo shoot is young enough to understand that Harry Potter reference other than me. Ugh.

I should probably re-read the series.

This snake is acting so superior, not even saying "Hello." Hey, I had scales once, too.