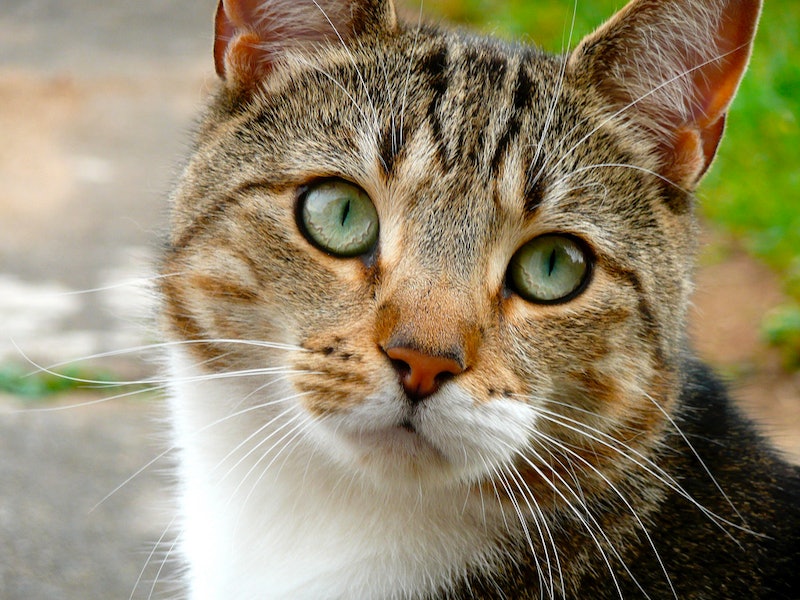 Because it's Friday, here, have a minor miracle: A stray cat in Mississippi broke out of an animal shelter after just 20 minutes in order to go find the family who had been feeding him prior to his arrival. It's a real-life version of Homeward Bound: The Incredible Journey, and it is officially my favorite thing I have read all week. Allow me to share it with you, because I can't not. And yes, I know I just used the dreaded double negative, but I don't care. I do, however, care about this cat finding its forever home.

This amazing story appeared on February 3 on the website Care2, which focuses on healthy living and aiding excellent causes. And you guys? It's going to leave you sobbing gigantic, blubbery tears of happiness by the end. I mean it. Here's the deal: Ann Bosche, who lives in Mississippi, found the cat beneath the camellia bush in her yard one night last year while walking her dachshund, Grace. Grace started barking at the bush, alerting Bosche to the presence of the cat underneath it; when she spotted it, she spoke to it softly, trying to get him to come out. When he finally emerged, she said, he revealed himself to be “a large, beautiful cat with a white tip on his tail. I said, 'Aren't you a fancy thing?'” The cat looked thin, so she brought him some food; although he was skittish to start, he ate his fill, then wandered off.

He returned the next night, though, so Bosche fed him again — and what's more, he kept coming back. She kept feeding him, of course; she called him Fancy, and after a month, she always found him waiting for her on the porch in both the morning and the evening. Given that the family already had a dog and two cats, though, Bosche's husband eventually suggested that maybe Fancy would find a better home if they took him to their local animal shelter. Bosche reluctantly did so; she said she cried the entire way home.

But here's where the story really veers into tearjerker territory: According to the shelter, Fancy escaped just 20 minutes after Bosche had dropped him off — and he was on a mission. Happily, one morning in April nearly a month after his escape, he accomplished that mission: Bosche woke up to hear her husband talking to someone in the kitchen. Given how early it was in the morning, though, she couldn't for the life of her figure out who. Here's what happened next:

“I looked at the clock and wondered who was at my house at 5:30 a.m. I got up to see and what I found was nothing short of a miracle. I saw a cat, sitting at my husband's feet, talking to him. I kept trying to focus on the cat and when he flipped his tail around, I saw proof. There was the white tip. I started crying and quietly said, 'Oh, my baby, hi, Fancy.' He turned, saw me, and ran to me, talking and squealing the whole way. I truly think he was saying, 'I found you! I'm home now.'”

You guys? I am crying ALL THE TEARS right now. ALL OF THEM.

The Bosches kept Fancy after that; how could you not? Heck, I want to keep Fancy, and I've never even met either him or the Bosches. I won't, of course, though; he's found his humans, and his humans have found him. I'm just going to sit here and “Awwwwwwww!” over it for the next zillion years.

Fancy isn't the first pet to have undergone an epic journey in order to find his way home; nor will he be the last. Holly the Cat traveled 200 miles to get home back in 2013; Bucky the Dog went 500 miles in 2012; and all these other pets went the distance in order to find their families again, too. These stories always hit me right in the feels — especially when the pet in question is a rescue — so if you'll excuse me, I'm going to go snuggle my own cats for a moment. They're assholes a lot of the time, but they're my assholes, and I love them. Cuddle time!