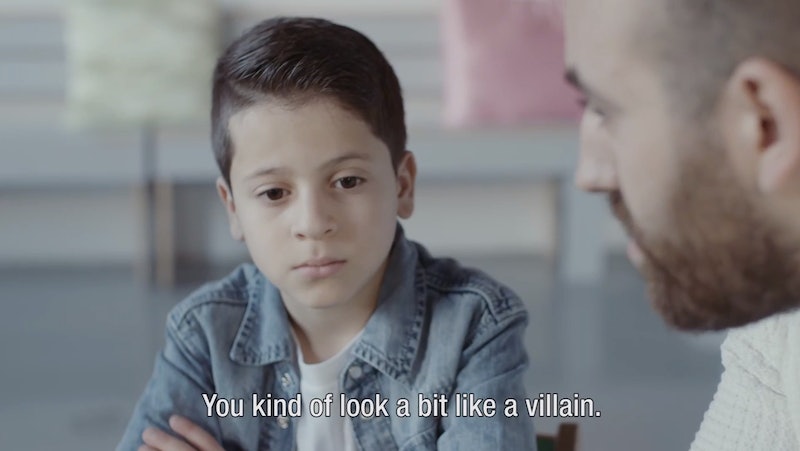 It's normal for acts of terrorism to leave a nation shaken. Afterwards, it's also all too easy to adopt an us vs. them mentality as a result — to grossly generalize and start viewing anyone who shares the terrorists' ethnicity or religious background also as enemies. One filmmaker is pointing out the dangers of this mentality with his "Let's Unite" video, by Abdelkarim El-Fassi, which challenges the collective guilt concept.

In the video, Netherlands-based filmmaker El-Fassi comments on generalization and assigning guilt by association with some seemingly exaggerated, and chilling, examples using children. El-Fassi says that his project aims to point out the increasing trend of collective guilt and how detrimental it can be to a society. And if the video disturbs you, it's meant to. El-Fassi told the Independent:

I’ve never felt this uncomfortable while directing a video. Sure, it’s totally unethical and pedagogically irresponsible, and yet as a society we’ve practiced this on the macro-level for years. We’ve been talking certain communities into feelings of collective guilt for years.

The video starts out innocuously, with a father asking his young son in a Spider-Man costume if he'd rather be a villain or a superhero. The boy answers enthusiastically, "Superhero!"

A Dutch woman asks her blond toddler where his hair is and he points to it. She then tells the tot that Norwegian mass murderer Anders Breivik also had blond hair, and therefore he has to apologizes for his horrific actions.

Another father tells his son, who wears a hat, that the Charlie Hebdo terrorists also wore hats, and therefore, the boy should apologize on behalf of anyone who's ever worn a hat.

Two other boys talk to each other about the collective guilt that's been imposed on them.

The boy's frustration is fueled by his own father, who is representing society as a whole here.

The father of the young Spider-Man tells him that because he's Moroccan, that makes him a villain, because Moroccans are villains in Paris, Syria, and elsewhere.

So, by association, the boy must apologize.

The blond boy is also forced to apologize.

At the end of the video, the father asks the boy if now he thinks he's a villain. His answer has changed from just a few minutes ago.

The transformation of the boy's image of himself is so, so indescribably sad. In one conversation, these kids are made to believe that they are evil even though they've done nothing. They're children. That blond toddler had no idea what half the stuff his mom said meant, but he was made to apologize on behalf of all blond people.

At first these absurd examples may feel like satire, but if you think about it, it's the exact line of thinking societies have reached for time and again following an act of terrorism. It's happening in France right now. Since the barbaric Charlie Hebdo attacks in Paris, the divide between France and its Muslim population has reached unprecedented levels, to the point that Prime Minister Manuel Valls has called it "territorial, social and ethnic apartheid."

And the same thing happens anytime a society is threatened by a minority — suddenly anyone who resembles that minority is viewed as the enemy by association. It's a dangerous phenomenon that hits close to home for El-Fassi, whose nephew, who can be seen in the film, is a third-generation Dutch-Moroccan. El-Fassi is hoping that his video will help raise awareness of this cultural trend, and ultimately help curb it. He told the Independent:

This has to stop, otherwise the problem will fester on for generations to come.