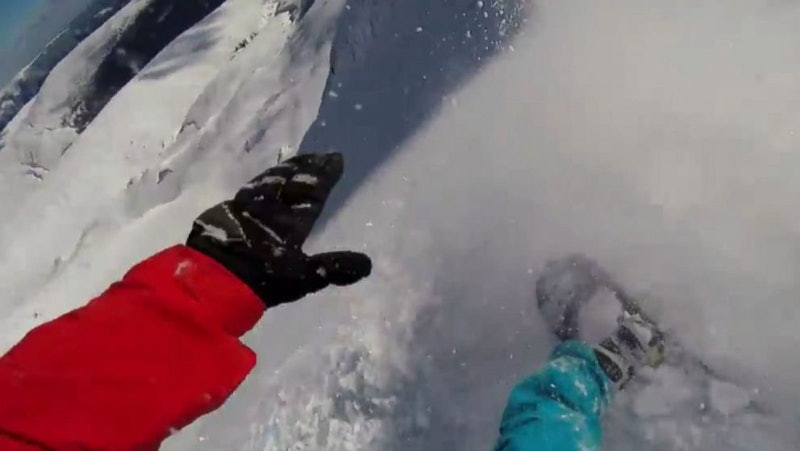 Here’s a video that’ll put your heart right in your throat (and make you determined to stay inside until winter is well over). Romanian snowboarder Sorin Radu recently captured an avalanche as it was just starting to happen with the Go Pro Hero 3+ camera he had attached to his helmet. Radu, who is a snow sports instructor and a mountain rescue volunteer, was snowboarding on Papusa Mountain in Gorj, a county in southwestern Romania, when the snowslide occurred. The terrifying video shows a crack developing in the snow ahead of Radu, signaling an imminent collapse. The snow around him begins to crumble, and he has little time to react before being taken down by a wall of powder.

Avalanches, which occur when weaknesses in the snowpack lead to outer layers of snow falling or collapsing, are a serious business. They can be triggered in a variety of ways, including both weather conditions (such as new precipitation or sudden warm temperatures) and by skiiers, snowboarders, and snowmobiles. According to the CBC, 90 percent of fatal avalanches are “triggered by the weight of one of the victims in the group.” Unsurprisingly, avalanches are extremely dangerous: In large snow slides, the snow can reach up to 80 MPH in the space of five seconds. 150 people around the world die every year in the slides; according to National Geographic, “Once the avalanche stops, it settles like concrete. Bodily movement is nearly impossible. Wait—and hope—for a rescue.” This is all a way of saying—Mr. Radu, you are lucky to be alive.

Watch the video below to see this overwhelming force of nature in action. The image of the snow cracking and undulating has a surreal quality, and reminds me of that scene in Inception when Ellen Page’s dream city ripples and explodes:

The whole thing would be kind of cool, except for the fact that this is real life and not a trippy, shared dream space, making these images of the ground literally crumbling beneath Radu’s feet is absolutely terrifying.

Watch the whole spine-chilling episode below, and try not to cringe. I dare you.