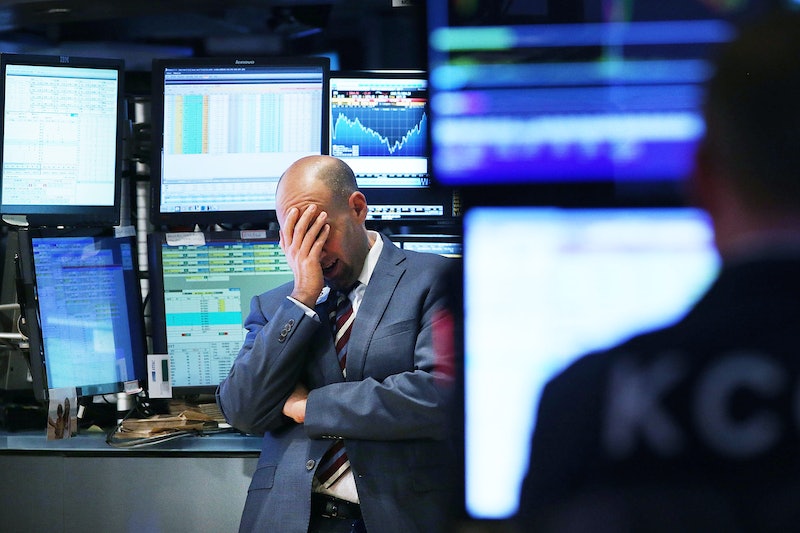 When it comes to getting ready in the morning, or before bed, or checking the mirror throughout the day, men and women don't have that much in common. Although men and women both get plastic surgery, there are differences in how people from opposite genders want to look after their procedure is finished. ABC News reports that men request "The Wall Street Wrinkle" during Botox injections, while women prefer to erase all lines.

Dr. Norman Rowe, a New York City board certified plastic surgeon, told ABC that while women prefer to have no wrinkles on their face, men are OK with a few wrinkles to avoid looking "overdone." Dr. Rowe coined the "The Wall Street Wrinkle," which refers to the large amount of male clients who work in finance (LOL). Male Botox patients tend to request a few creases be left behind after the injections — otherwise known as "growing old graciously."

Dr. Rowe says the men look at those lines and hair discoloration as a badge of honor. Despite that, the ASAPS reported that in 2013, men had over one million plastic surgeries, making up 9.4 percent of the total number of plastic surgeries in the United States. The No. 1 procedure undergone by male patients was not Botox, but liposuction.

And surgery isn't cheap, either. Rhinoplasty, which ASAPS reports is the most common type of plastic surgery across both genders, averages at $4,314. Botox, however, can cost over $350 per injection.

Dr. Rowe points out that the national average of men looking for non-invasive procedures is about 7 percent, still leaving a gender gap between men and women. While working men are OK with a few wrinkles, working women prefer to not have any wrinkles and are not worried about looking as if they've had plastic surgery.