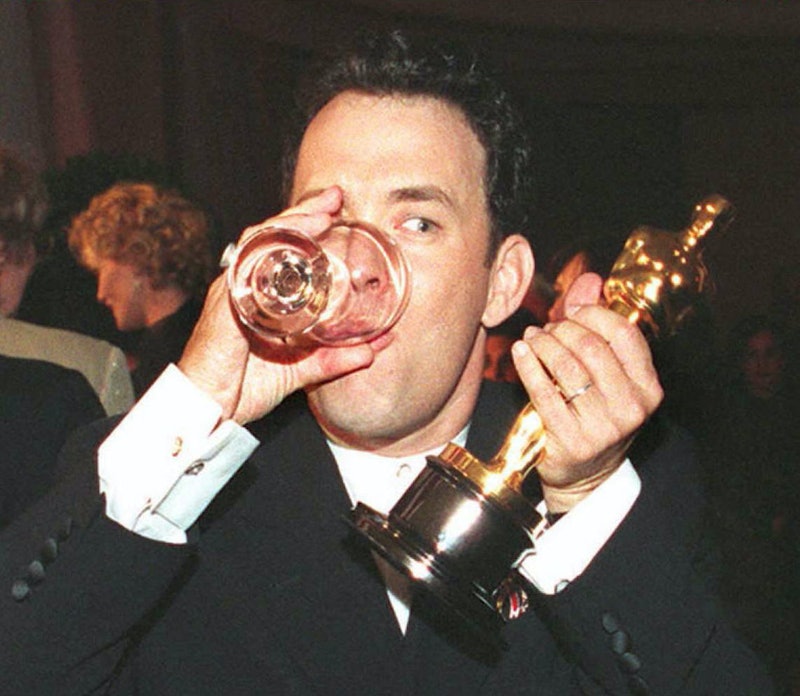 It is a generally accepted fact that Tom Hanks is better at being a human than most of the rest of us are. He is a national — nay, international — treasure, there is no denying. We were all reminded of that fact Friday, however, when Tom Hanks reunited with the equally beloved Wilson, his co-star/best friend/fellow icon from 2000's Cast Away.

It was this amazing picture, of course, that got me thinking: At 58, Hanks is just as good at showing up in unexpected but delightful places as he's ever been. Benedict Cumberbatch often leaves awards shows being noted for his photobombing skills, but we all know who the real photobomb king is — it's Hanks, obviously. Leo DiCaprio just doesn't even stand a chance.

Not that Cumberbatch (or DiCaprio) should feel at all bad about not being able to Trump the legendary actor — who, if any of us, really could? Like I said, Tom Hanks is just better than the rest of us at being cool. We might as well all just shut it down now, because Hanks already won this game.

While we're on our way out, though, we might as well spend the next few moments reveling in some of the glory Hanks has provided us with — specifically in the realm of the photobomb.

For one, there was that time he found himself near this drunk dude...

Can you imagine waking up to find a picture of Tom Hanks on your phone?

In fact, if you are ever drunk and near celebrities you should really be aware that Hanks could appear at any moment. Here he is photobombing a drunk-looking reporter from The Observer .

There was also this time...

And this time, with wife Rita Wilson...

And finally, he reunited with his long-lost soulmate...

Which was technically Wilson photobombing Hanks.

There's a reason they're best friends.

Of course, it's not always a cut-and-dry photobomb. Sometimes the delight comes in Hanks just showing up in places you wouldn't expect him, like at Justin Bieber's manager's wedding, and cutting up the dance floor.

If we combined the photobombing powers of Hanks, Cumberbatch, Tina Fey, and Jennifer Lawrence we might just be able to power the planet and end our dependency on oil.

BONUS: Here's something that is not a photobomb, but that is quite amazing nonetheless.