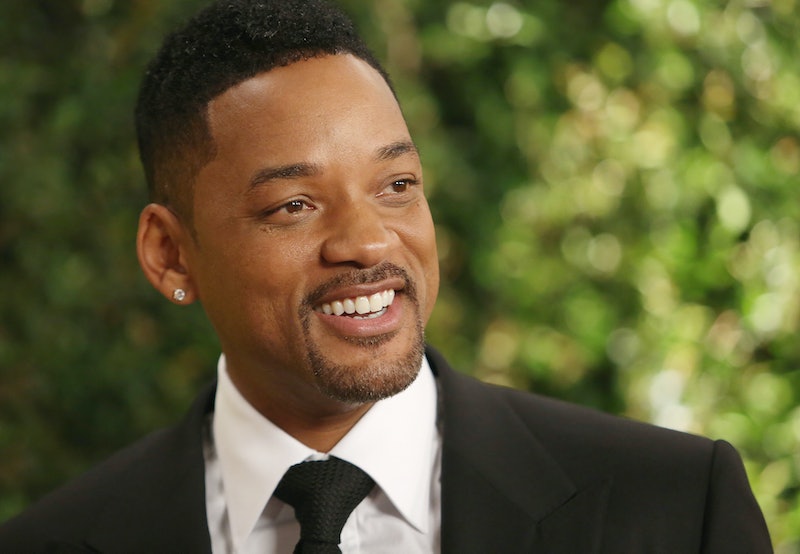 For anyone who felt a twinge of disappointment at Will Smith not being present when Jimmy Fallon recreated The Fresh Prince of Bel-Air opening credits, fret no more: The late night talk show host just made up for the actor's absence in a major way. During an appearance on The Tonight Show to plug his upcoming movie Focus, Will Smith and Fallon's impromptu performance of Rob Base and DJ E-Z Rock's hip-hop classic "It Takes Two" totally stole the show.

It all began when Smith and Fallon put their beat-boxing skills to use with the iPad and iPhone app Looper (which is pretty cool, by the way) to basically reconstruct the song's beat — which, naturally, included a few of their own special tweaks.

After watching the clip, I'm beginning to think that Fallon may have missed his calling as a rapper. I mean, he claims to be a "classically trained beat boxer," and although I'm not sure what that exactly is, I have no reason to doubt that it's true. Plus, considering that these days Smith is a big-shot Hollywood actor, it's actually really cool to see him ease back into his rapping persona.

Check out Will Smith and Jimmy Fallon's nostalgic "It Takes Two" performance on The Tonight Show:

I mean, clearly Smith's still got it, and although he hasn't released a new album in 10 years, this performance gave me the urge to take a trip back to the '90s to look at these videos from Will Smith rapping heyday:

As the official hip-hop summer anthem, this song never ages. (But, that's clearly not the case for the Fresh Prince's blue jean cut offs and chicks sporting biker shorts as a fashion statement.)

Gettin' Jiggy With It

Almost 20 years later, I still have no idea what "jiggy" means, but I can't get enough of these bright-colored tracksuits, the all-girl dancers with one pant leg rolled up, and the nod to Michael Jackson’s "Remember the Time" choreography.

Just the Two of Us

Remember this guys? It was the sweetest video everrr, and it totally reminds me of all those mushy Super Bowl dad ads...except it's nowhere near as depressing as those were.

It's hard not to laugh watching Smith two-steppin' with an alien.