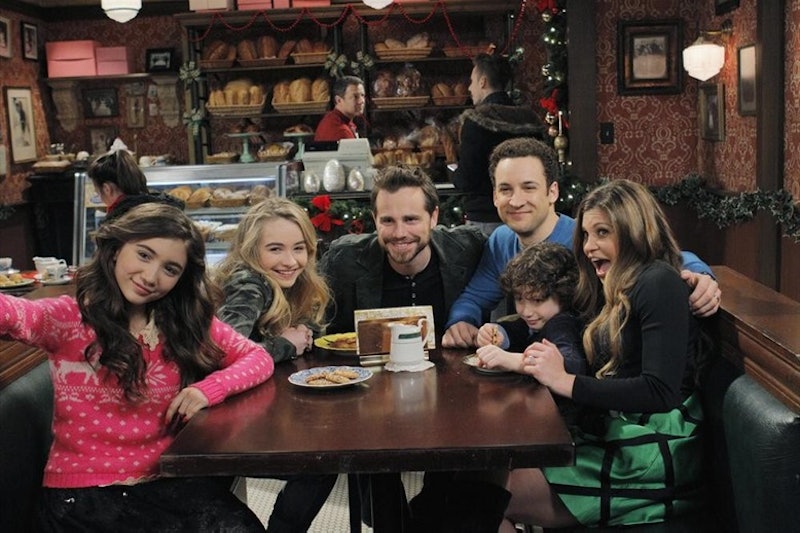 If you're anything like me — a dedicated lifelong Boy Meets World fan — you were excited, as well as a little hesitant when the Disney Channel's Girl Meets World spinoff of the show was first announced. Obviously, bringing back the most sacred of television couples is an awesome idea, but it has to be executed very carefully. Could we trust that Cory and Topanga's future lives were just as good as we imagined they were? Would they be true to their original characters? Would the fact that the show's aimed at kids warp it into something totally different from the show we grew up with?

Luckily though, so far, I couldn't be happier with the way Girl Meets World has brought some of my favorite characters back to life again, even all these years later. The Boy Meets World universe has spawned itself into a brand new show for a brand new audience, but with enough connections to its former incarnation that makes it feel cozy and familiar for us older fans to enjoy.

And so far, that's exactly what it's felt like: Cozy and familiar, like catching up with old friends I haven't seen in awhile. Something the show does particularly well is reference the original source material in a way that's subtle but totally obvious to anyone who still watches their Boy Meets World DVDs today. And just to make sure you don't miss any of the references, here are some of the best inside jokes Girl Meets World has treated us to so far.

Remember the Feeny poster that said "I want you to stay in school" that Cory & Shawn spotted while riding the subway in the original Boy Meets World? The Matthews run into a similar one in an NYC subway station that says "Stay in school" on Girl Meets World.

Remember the baby Amy and Alan had toward the end of BMW? He makes several appearances all grown up — and looking 50 shades of fine — in GMW.

4. Frequent References to "Do Good"

The famous, inspiringly heart-wrenching words of Mr. Feeny: "Dream, Try, Do Good" are very present in the reboot. Not only are the words on the board in Cory's classroom, but Topanga also reminds herself to "do good" when she finds herself on the wrong side of a case, fighting against the little guy as a lawyer.

Oh, the flashbacks. Is there anything sweeter than reliving Cory and Topanga's most significant moments from when they were kids? Especially when the crimped hair is involved.

6. Cory Goes to the Jersey Shore

In the Boy Meets World episode "The Play's The Thing," Cory's family is prepping for their annual trek to the Jersey Shore for the Goofy Golf tournament. In the Girl Meets World universe, Cory's keeping the tradition alive by taking his family there on vacation every year.

Although now, she's keeping track of them combined with Riley's. It's only fair — Topanga passed her brains on to her daughter, after all.

And if you remember, her dad used to do the same.

Just like Cory and Topanga did Romeo and Juliet at their school, Riley's school puts on a production, too.

Remember when Cory, Topanga, and Shawn competed on that academic TV show against Einstein Academy? They're still going strong in the present and are referenced several times as rivals to John Quincy Adams' academic team.

Like when she said "Eating will only keep me alive?" Her overdramatic father has said that same statement as a teen, too.

And he ties them the same method his Aunt Morgan did as a little kid: The bunny ear goes around the other bunny ear.

16. The Phillies Games are Still a Tradition

One of the sweetest moments in the early years of Boy Meets World was when Alan kept Cory up past his bedtime to watch a Phillies game with him, so he had time to hang out with his son. When Auggie can't sleep, Cory does the same. And I love it.

One of the saddest episodes of BMW is when Brenda the lunch lady dies and Cory is heartbroken, especially since he treasured the moments when she would put the gravy on his mashed potatoes like lava. Now? Cory still has a fondness for mashed potatoes, and I swear it's brought up at least once an episode. RIP Brenda!