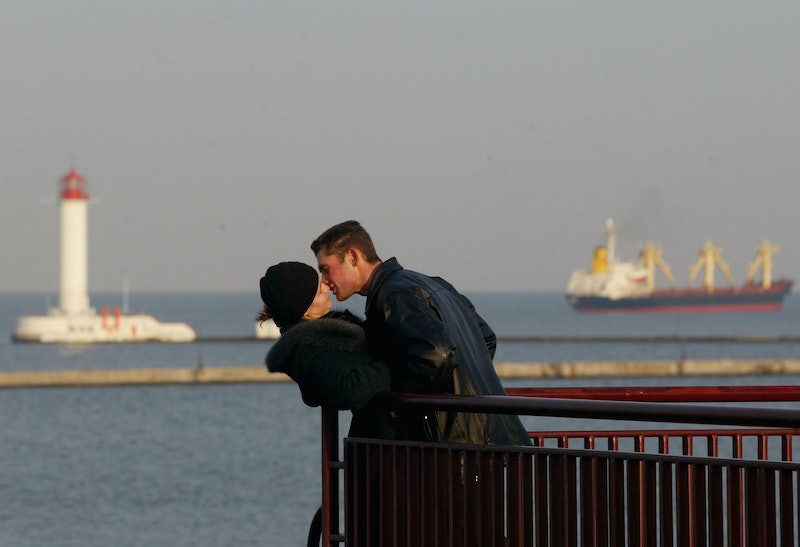 Well, this is… interesting: According to science, humans may be physically attracted to people who resemble their parents. To be fair, I don't mean we dig people who are deadringers for our folks (something which I consider a good thing); however, research shows that our preferences with regard to age, hair color, and eye color may have something to do with the people who raised us.

The research isn't new — David Perrett of Scotland's University of St. Andrews and his colleagues published their results in the early 2000s — but it's making the rounds again thanks to Business Insider, so just in case you missed it when it debuted over a decade ago, let's take a moment to revisit it. Ready for this? We're going to look at two studies; then we're going to try to figure out what they're telling us. Here we go!

Study the First: Attractiveness and Age

For this study, 83 heterosexual students from the University of St. Andrews — 48 women and 35 men, all between the ages of 18 and 27 years old — were shown two sets of composite images: One depicting a male face, the other depicting a female face. Both sets showed its respective composite face in five-year increments, spanning a grand total of 18 to 60 years old. The participants were then asked to rate the faces that lined up with their sexual preferences by attractiveness on a scale of one to seven — one for the least attractive and seven for the most. The catch? They were asked to rank the images twice: Once within the context of having a short-term relationship with the person they depicted, and once within the context of having a long-term relationship with them. Then they were asked to rank the images of the faces that were the same sexes as themselves, minus the context of relationship length.

Thank you for that wonderful demonstration, Pam.

Anyhoo, the results found that women born to “old” parents — that is, parents who were over 30 at the time — were more attracted to the older male faces than women with “young” — those who were under 30 at the time of birth. The men, meanwhile, expressed preferences for female faces according to the ages of their mothers, but only when considering attractiveness in the context of long-term relationships.

It's worth noting that all the students identified as heterosexual; furthermore, they all had “biparental upbringing,” which means they were raised with two parents in the picture. As such, we don't have any data pertaining to people of other sexual preferences; nor do we have any pertaining to people who were raised by one parent, by grandparents, or by any other type of parental configuration that wasn't simply “Mom and Dad.” Still, though — according to this particular sample, heterosexual men and women do tend to go for older or younger people based on whether their parents were old or young when they had them. Interesting, no?

The full study is available to read online for free, by the way, so check it out here.

In their second, Perrett and his team surveyed 697 people recruited via the Internet: 303 women between the ages of 18 and 63, and 394 men between the ages of 17 and 67. Again, all participants identified as heterosexual and had biparental upbringing; this time, they also all had a current partner. Participants answered a questions about what features they thought their ideal partner would have, what hair and eye colors ran in their familyhttp: , and questions about their own sex, their age, and their sexual preferences.

The sample size was obviously bigger this time; but hey, guess what? Men and women were both both likely to prefer romantic partners with the same eye and hair colors as their parents.

Sure, Draco. You do that. But first, maybe you should read the whole study; this one is also available in its entirety for free.

Perrett theorizes that this wacky preference for people who share qualities with our parents might be the result of either imprinting or what's called the “mere exposure effect.” You probably know about imprinting already; since we latch onto our caregivers at a very early age, we might as a result seek people out as we get older who have similar qualities to those caregivers — we associate them with trust (and also with adorable duck videos). The mere exposure effect, meanwhile, is a pretty simple concept in theory: The more time we spend with someone, the more we like them. Similar features to our parents in other people might trigger the same kind of, “You! I like you!” response we get from hanging around with our parents a lot.

Where Do We Go from Here?

Personally, I'd like to see research with a sample size that isn't limited to the heterosexual, biparental upbringing set. Does the same phenomenon present itself across the wide and incredibly varied spectrum of sexual orientations? What about for people who were raised in other caregiving circumstances? There are also probably a lot of other factors at work in what we consider attractive, too. All of this is a good place to start, but there's still a lot we don't know. So: Who's up to the task? I'm sure I'm not the only one who'd like to see the results!