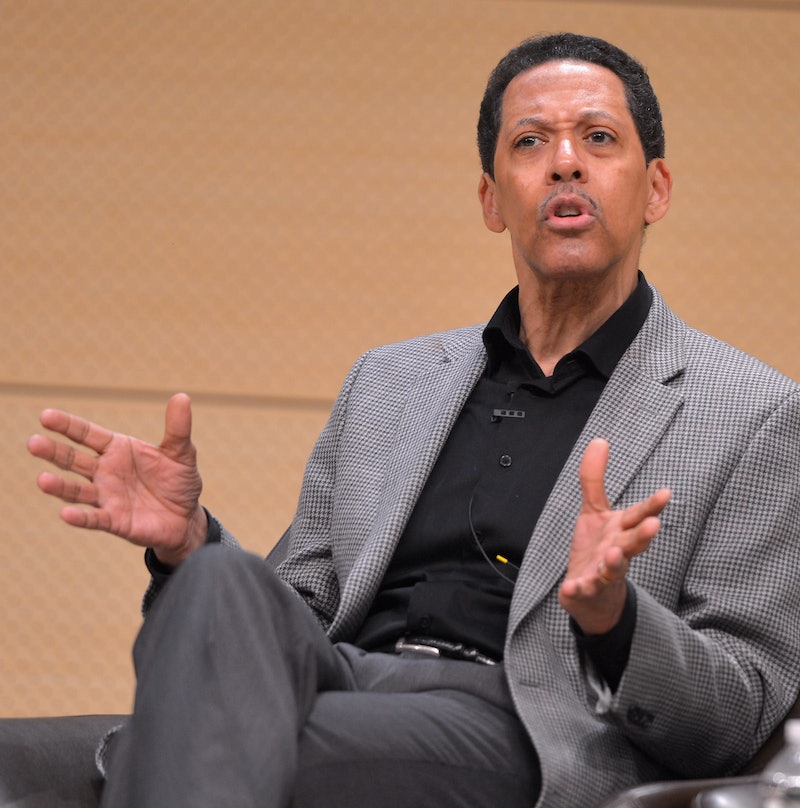 As things continue to spiral downwards in Gotham City, it looks like at least one character will need some kind of medical attention in the Feb. 9 episode of Gotham , because "The Scarecrow" is adding Peter Jay Fernandez as "Doctor." The character name "Doctor" doesn't evoke very many details, especially because we already have one doctor in the cast, Morena Baccarin's Dr. Leslie Thompkins, Jim Gordon's new sweetheart and the recently instated medical examiner.

Since Fernandez is mostly sought after because of his soothing, sonorous voice — he narrates a lot of audiobooks — I'm going to guess that this Doctor will be a good guy. He could be Leslie's newest associate down in the medical examiner's office, working alongside Ed Nygma as a technician, or working in a Gotham City hospital. Whether a psychiatrist or an ER surgeon, I just can't believe that the guy who read 12 Years a Slave aloud for Audible could possibly be playing a Gotham bad guy.

And trust me, given where we left everyone at the end of "The Fearsome Dr. Crane" and what they're planning to do next, there are plenty of Gotham characters who could need a good doctor like Fernandez by the end of "The Scarecrow."

In this episode, Bruce is going to attempt a solo hike he used to do with his dad. While Bruce is pretty resourceful for a prepubescent kid, he's not bulletproof, and this could be one of his early brushes with danger. He might even injure himself after encountering a flock of screeching bats flying overhead. It could be a formative experience for the future Batman...

Fish is in a hairy situation. Her boat was captured, and now she either has to escape or fight her way out of this shady captivity she's trapped in. We barely seen Fish get so much as a scratch so far, so needing Fernandez's assistance will come as a huge surprise, and might make the audience realize how much they care about Fish.

Jonathan Crane is the subject of his father's experimentation. Something tells me that Gerald probably won't figure out the perfect chemical formula to eliminate fear, and might even end up making things way worse for his son. The hospital or even Arkham Asylum might be left to pick up the pieces.

The Victim o' the Week

It Could Be An Ironic Name

While Fernandez's experience playing authority figures implied to me that he'd be playing a good doctor, maybe I'm wrong and in reality he'll be a homeless man who gives some medical advice or a mob torturer who uses dental tools or something. "Doctor" could easily be an ironic title.