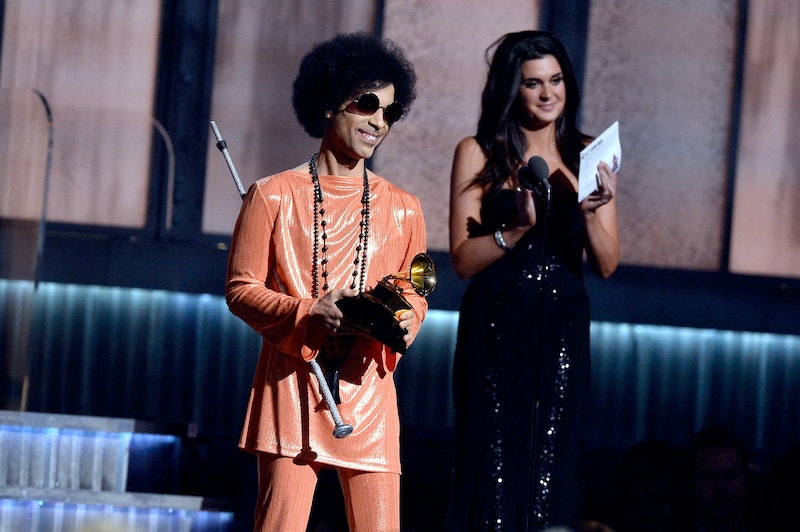 It's just gotten to that point where Prince can do whatever he wants and show up where ever he wants. The Artist Known (and Formerly Known) as Prince made a special surprise appearance at the Golden Globe Awards last month, for which the star-studded and liquored-up audience went absolutely nuts for the legendary singer. Next, Prince announced that he'd be making another awards season appearance at the Grammy Awards on Sunday night. Us Weekly quoted a source saying, "He has something very, very special in the works!” And, they didn't lie: The very very special was clearly evident when he came out on stage in an orange outfit. Very, very bright orange.

Prince appeared on the Grammy stage wearing a shiny orange blouse-suit like outfit and some badass beads. His outfit looked like a shimmery orange soda waterfall as he introduced the award in support of the album. "Albums. Remember them? Albums, like books and black lives, matter," he said, before handing off the Album of the Year trophy to Beck's Morning Phase.

In his long career, Prince has won seven Grammys and has been nominated for a total of 33 Grammys. Making awesome appearances at award shows isn't the only thing Prince has been up to. In 2013, the 56-year-old singer released his latest albums Art Official Age and PLECTRUMELECTRUM with his all-girl group 3rdeyegirl. The first single from the latter album is "Breakfast Can Wait," which has cover art that used an image of Dave Chapelle-dressed-as-Prince from a classic Chapelle's Show sketch. Because Prince is just that cool — even cool enough to pull of wearing an orange soda waterfall.

But the Internet had other ideas, too. Here's some of the things that folks thought Prince's outfit looked like.

Claire Huxtable from The Cosby Show

Now, one question remains: Will Prince be at the Oscars?