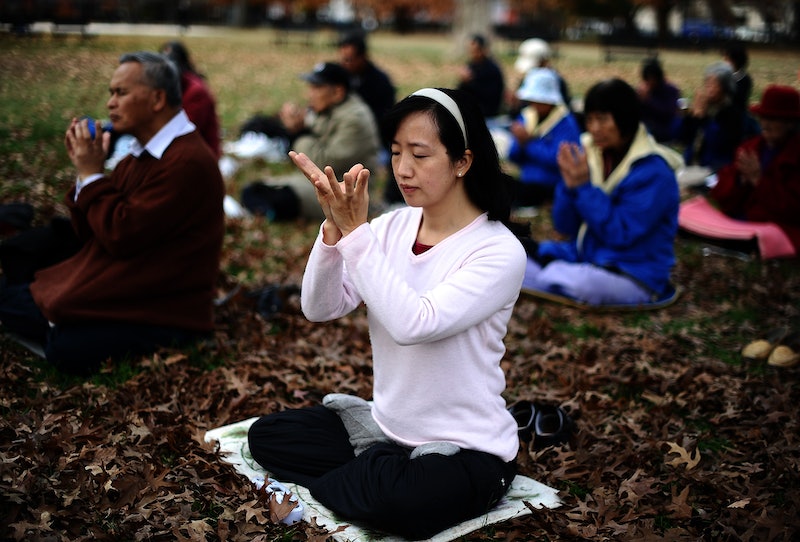 If there's one part of your body you don't want to wither and die, it's your brain. Thankfully, according to science, meditation can help prevent brain shrinkage, which is apparently a thing that happens as brains age. Once people reach their mid-to-late 20s, our brains begin to slowly lose weight and volume as time passes. So basically, once you're finally done with your teens and the hassle of your brain finishing up its development, the stupid thing almost immediately starts breaking down. Great.

Obviously, this slow shrinking of the brain doesn't become a problem until we're much, much older. But, if you'd like to try to do something about it now, science has an answer: meditation. According to research from a UCLA team of scientists, people who meditate show less age-related brain atrophy than those who don't.

In the study, the researchers examined the brains of 50 people who have been meditating for years and 50 people who didn't, all between the ages of 24 and 70. Both groups showed signs of brain aging — nothing stops Father Time completely — but those who meditated saw their brains lose less mass than those who did not.

These findings build on previous research by the same team several years ago that meditation helps preserve gray matter, the tissue that connects neurons in the brain.

In other words, meditation is not just sitting crosslegged and doing nothing.

“We expected rather small and distinct effects located in some of the regions that had previously been associated with meditating,” said the study's co-author Dr. Florian Kurth. “Instead, what we actually observed was a widespread effect of meditation that encompassed regions throughout the entire brain.”

This is certainly not the first study to find a link between meditation and brain benefits. There have been many, many, many others, and the evidence only seems to grow more substantial every year. And if, in addition to all it's other wonderful mental benefits, meditation really does help slow the cognitive decline that comes with aging, that would be extra awesome.

As Dr. Eileen Luders, first author on the UCLA study, pointed out, now that life expectancies in the US are increasing, it's important to try to make sure those gains don't come with massive decreases in quality of life from cognitive decline as people age. And it seems that meditation might be the key.

So get into mediation. It's not as hard as you might think — and it's definitely not as boring as people claim. Plus, you'll probably thank yourself when you're older.