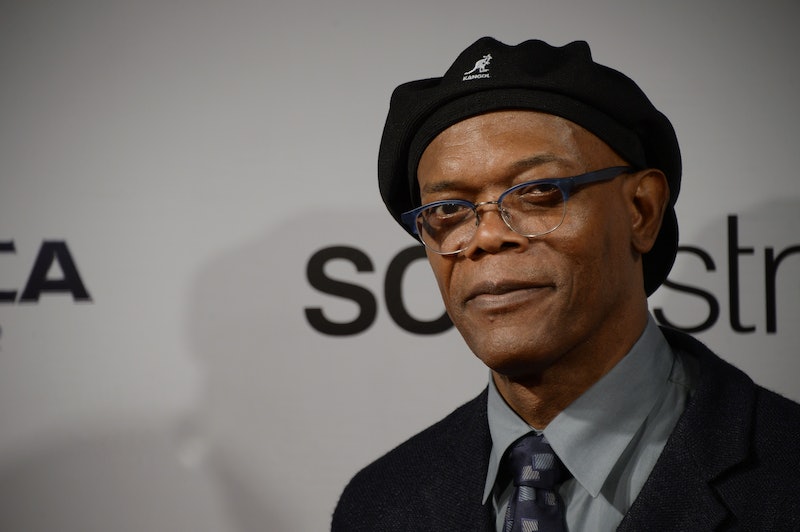 If you're still slightly devastated over the news of Tim Burton and Helena Bonham Carter's break-up, perhaps a promising update on one of Burton's film projects will help — because, seriously, this is some pretty awesome news. Variety reports that the writer's fantasy-action film Miss Peregrine's Home For Peculiar Children just might have nabbed a new star — veteran actor Samuel L. Jackson. Reportedly, the 66-year-old is currently discussing his prospective role with Fox, so we'll just have to stay tuned for the official confirmation.If you're not familiar, here's a little back story about Peculiar Children: The movie will be based on the Ransom Rigg novel about a teenage boy who tracks down clues that lead him to an island, where he becomes the unofficial guardian for a group of orphans whose superpowers have made them the target of vicious monsters. Sounds pretty interesting, but there's no word yet on exactly what role Jackson will take on in the film — but, given the array of characters he's portrayed in a handful of different film genres throughout his 40-plus years as an actor, there's no doubt he'll make a great contribution.It may seem like a different direction for Jackson, starring in a Burton film — but really, at this point, Jackson could completely master any role that's thrown his way, even if it's as cheesy as an FBI agent battling a plane full of snakes. His resume could take months to revisit, but here's a little look at a few of the various roles he's tackled over the years to prove it to you:

Ray Arnold was a relatively minor character in Jurassic Park, but who can forget how he managed to explain complicated code while barely hanging on to that cigarette?

Because what's a respectable acting career if you haven't played a superhero?

Although Mace Windu succumbed to a blast of lightning in Star Wars Episode III: Revenge of the Sith, Jackson wants to resurrect the character for Episode Seven.

Jackson's take on Stephen in Django Unchained easily made him one of the film's most captivating characters.