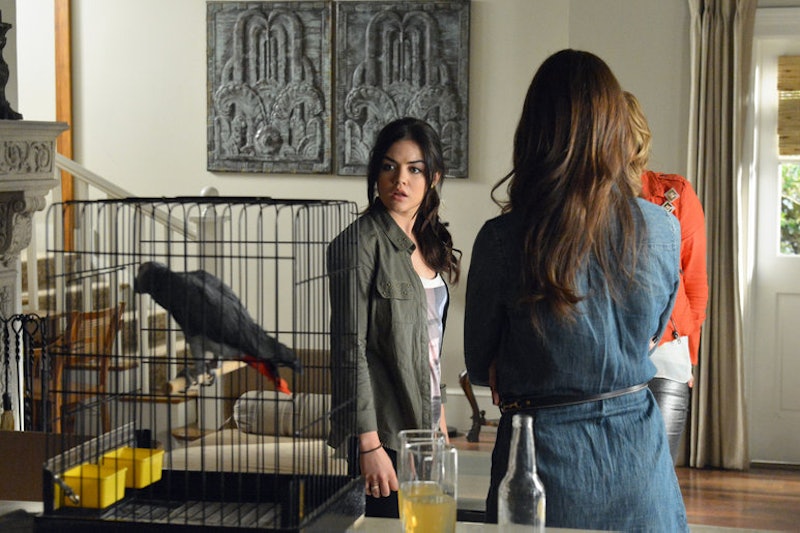 As a founding member of #Team #Anti-#Ezria, I'm happy to report that this episode introduces a new (age-appropriate?!) love interest for Aria. With the A-Team only growing more violent, it makes sense that an adorable pocket person such as herself would be interested in exploring self-defense classes — and double-interested in exploring Jake, her cute instructor.

I understand why martial arts would appeal to the accessories-happy Aria (colorful belts!), but I took karate for years as a kid, and it didn't involve nearly this much sensual caressing. I might've stuck with it longer if it had.

The jury's still out on Jake's dateability, but he's already proven himself to be a goldmine of incredible dialogue:

-JAKE: "The best way to find out if you can trust someone ... is to trust them."

Hanna's mom, back from New York, reacts strangely when her daughter presents her lost cell phone, recovered from Detective Wilden's casket. Later, Hanna discovers a pair of filthy silk Manolos, which Mom had apparently tried to clean with a toothbrush. Suffice to say that Mama Marin's behaving in a way that it is not unlike what you'd expect from someone who knows more about a murder then she's letting on. Ahem.

Our creepy masked figure is back, attacking Mona and stealing her car. After falling in the ensuing struggle, Emily suffers from ominous shoulder pain. Girlfriend's girlfriend Paige has already designed a 3D simulation of their dorm sweet dorm, but there's only one spot left on the Stanford swim team. Landing that scholarship could hinge on Emily's performance in an upcoming meet. So, rather than seek medical attention, Emily steals unspecified prescription pills.

From there, it's full speed ahead into after-school special mode. Things get all weebly-wobbly as Emily swims (because, drugs) and she hits her head, hard, against the pool wall. Yikes.

Personally, I kind of hope that Emily doesn't make the Stanford swim team. College isn't for time-consuming varsity sports; it's for stealing cereal from the dining hall and watching 20-hour Law & Order: SVU marathons with your roommates.

Spencer receives a rejection letter from U Penn. She tells no one but Mr. Fitz, who helps her edit her way-too-TMI-y application essays. Meanwhile, Spence's boyf Toby has stolen Mona's RV for A in exchange for a copy of his mother's doctor's notes from the night she killed herself. These are also way-too-TMI-y, but give the pair cause to suspect that Mrs. Cavanaugh's death might not have been a suicide after all.

Mrs. DiLaurentis, who radiates a 300-meter radius of crazy, gives Hanna a parrot that once belonged to Alison's grandmother. Not only does this bird repeat characteristic Ali-isms, she also whistles a unusual melody — one that Spencer realizes is actually the tones of a phone number. But before the Liars can decode the digits, the parrot disappears.

In the last moments of the show, a mysterious gloved figure (Pretty Little Liars must have a sky-high mysterious gloves budget) feeds a bite of Cornish game hen to the abducted parrot. Isn't that how mad cow disease happens?

See you next week, bitches. Xoxo.

The most unintentionally hilarious moment of the week: Spencer constructs a forensic recreation of the area surrounding the cabin using carrots, mozzarella sticks and French fries.

More like this
Everything To Know About The 'Pretty Little Liars' Reboot On HBO Max
By Mary Kate McGrath and Jack Irvin
“The Door Is Always Open” For Another 'Breaking Bad' Spin-Off, Says AMC Boss
By El Hunt
Emma Thompson, Lashana Lynch, & Stephen Graham Lead Netflix’s 'Matilda'
By Sophie McEvoy
'The Summer I Turned Pretty' Using “Cruel Summer” Has Twitter Begging Taylor Swift To Release A Music Video
By Radhika Menon
Get Even More From Bustle — Sign Up For The Newsletter