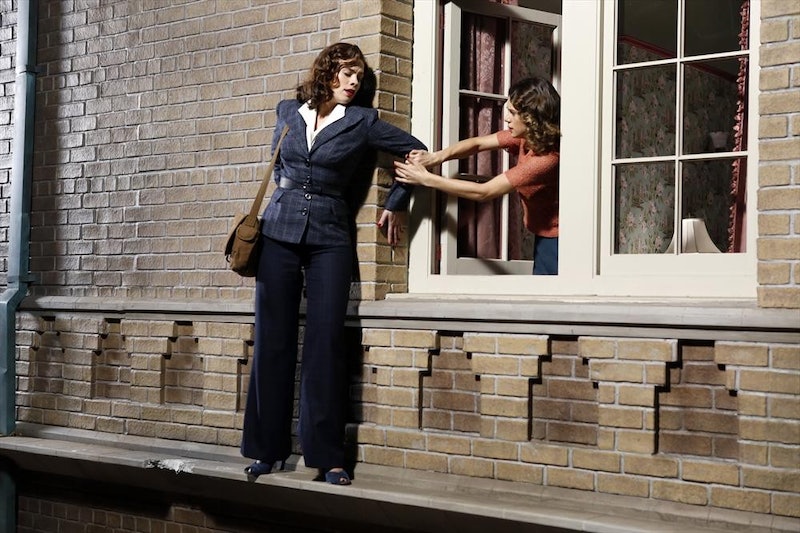 Last week's Agent Carter was jam-packed with action and girl power, but one of my favorite characters was missing. Where was Angie Martinelli on Agent Carter and how does she fit in to this growing mystery? Could Angie be leading a double life as well? We know that she's a fast-talking actress and waitress who's just longing for a friend in Peggy Carter. While I don't blame her, I can't let my guard down. Lyndsy Fonseca is more than just Ted Mosby's daughter on How I Met Your Mother. She starred in Kickass and Nikita. I don't think Marvel would hire an actress with action chops if they weren't expecting her to use them. Is Angie hiding something?

Last month, executive producer Michelle Fazekas shared some interesting, but cryptic, clues about Angie with Entertainment Weekly, saying, "There’s one little surprise that will come out about Angie toward the latter half of the season. There’s something that you wouldn’t expect about her."

What could that surprise be? In an interview with IGN, Fonseca herself insisted that Angie was nothing like her character on Nikita. However, there are different ways to have a double life, as Agent Carter has already proven to us.

In last week's episode, Dottie and Peggy discussed Angie's snarky remark that she was too full of "ennui" to leave her apartment. Dottie said that it sounded very French. Was Angie being melodramatic and ahead of her time as an actress, or is this a clue? After Dottie's own big reveal, which was hinted at with a detail about her studying ballet, we know not to take these types of casual comments lightly on Agent Carter.

Is Angie a French secret agent, or some kind of French operative? It would be interesting to have England, France, and Russia represented on one hall of the Griffith Hotel in New York City. The French Resistance was such an active part of World War II, it seems unlikely that the Marvel Cinematic Universe would let it go untouched.

What if Angie's working with Howard and Jarvis somehow? I would much rather her be on the good side. The relationship between Angie and "English" is just too cute. On one hand, were I Peggy Carter by some miracle, the discovery that all my friends were undercover agents would be devastating. It's so important for a woman in Peggy's position to have strong female friendships, as she's constantly belittled by her male coworkers and needs some support. It's important for all of us, actually. On the other hand, having a secret enemy on one side and a secret ally on the other would be kind of poetic.

Remember in the pilot, when Jarvis phoned Mr. Stark and told him that he thought Peggy would be "perfect" and that she "didn't suspect a thing"? I've always thought that meant they were already grooming her to head up S.H.I.E.L.D., but we haven't had confirmation on that yet. In fact, the massacre that Peggy's bosses are uncovering that Howard Stark is involved with somehow is pointing to a larger conspiracy. It hasn't been the wittiest or the most flashy aspect of the show so far, but I think we should start paying attention.

Full disclosure — I did take about five minutes of my time attempting to re-arrange the letters in "Angela Martinelli" to form "Maria Collins Carbonell," the name of the woman who will eventually marry Howard Stark and be Iron Man's mother. While the names do sound similar, there's no middle name I could think of that Angie could have and make it fit, "Tom Marvolo Riddle"-style. At least I saved you all five minutes?