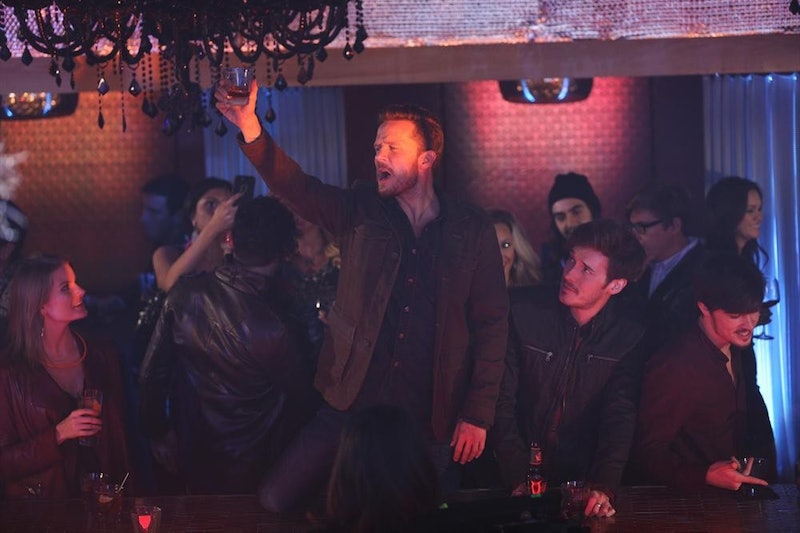 The boys are back in town on ABC this week. After Luke's poor handling of his heartache on Nashville last week, I would expect nothing less. According to the official ABC press release for this week's episode of Nashville , "I've Got Reasons To Hate You," "Luke enlists Gunnar in his efforts to forget his heartbreak, first by writing revenge songs, and then by carousing and they bring a cautious Will along for the bar hopping."

Well doesn't that just sound like the most fun ever? I'm only being slightly ironic here. Luke may have been a jerk about the broken engagement to Rayna, Deacon, and the public, but maybe there's hope here? People always say that there's strength in numbers, right? Who am I kidding? This is going to be a disaster.

Still, when did you ever expect to see Luke, Gunnar, and Will in a scene together? This has the potential to be a great roundup of the many worlds and 'ships of Nashville. You would expect, considering his ties to Scarlett, that Gunnar would be on Team Deacon. Then again, Gunnar is experiencing some heartbreak of his own. Zoey and Kylie both left town. Scarlett is keeping her distance. He lost his son twice, first to a paternity test and then to the courts. It's amazing that Gunner has kept it together this long. Plus, Will Lexington's life is a constant roller coaster of stress and blackmail. The three boys may be an unlikely trio, but I'm sure they won't have trouble bonding for a night of "carousing."

In fact, I think I'm most concerned by the word "carousing" in this Nashville episode. It's such an innocent word at first glance. It might make you think of a carousel. It literally means "to drink and make merry." Unfortunately, this cute little word could have disastrous consequences. Will is invariably going to violently hit on some poor unsuspecting fellow. Luke is probably going to smash things, and who's gonna keep Gunnar away from sofas?

Were I writing this show, the boys would vent their frustrations by painting pottery or, like, going on a camping trip or something. Why does it always have to be bar hopping? As I mentioned earlier, Luke is on thin ice here. He was brought on Nashville as a love interest for Rayna and we haven't really seen him as a character undefined by that relationship. So far, he has not made a very good new "first impression" on us.

Also, what exactly does the description mean by revenge songs? Are we talking like, Adele and Taylor Swift here, or something more sinister? I suppose it is more constructive to pour your emotions into song rather than actually bust some windows out of cars, and what have you.

I'll look for the silver lining here, just in case this "boy's night out" really blows up in everyone's face. At the very least, it looks like Wednesday night's Nashville won't feature Luke going after Deacon again. That poor man has enough to deal with right now. Jealous exes of former flames will have to go to the end of the line.