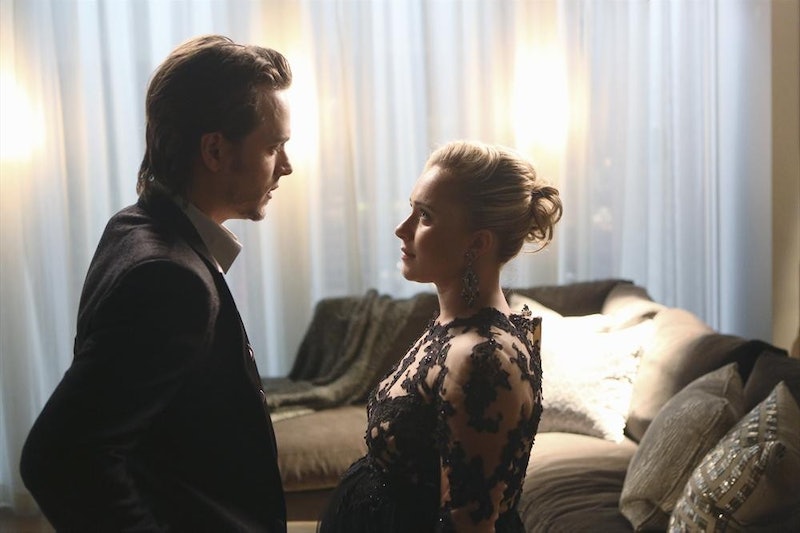 Nashville hasn’t been on since December, so there’s plenty of catching up to do. Though it’s mainly a show about the music of the city of Nashville (which I am all about, because the music on the show is exceptional), let’s focus on the real star of the series: all of those juicy relationships. All of the couples on the show went through some serious trauma in the beginning of this season, especially Luke and Rayna, so I'm here to recap the first half of Nashville Season 3, because there are so many relationships in turmoil, it's hard to keep track.

If you remember, these Luke and Rayna were engaged to be married in a sort of country-mega-star nuptials, but thank the country gods that Luke and Rayna called it quits. After Rayna’s sister, Tandy, comes back to Nashville for the “Ruke” wedding, Tandy acts as Rayna’s reflection, forcing her to come to grips with a lot of things she doesn’t like about her relationship with Luke. There are too many to list (I hate Luke Wheeler and I don’t care who knows it), but they include: not caring about his kids, wanting to send her kids off to boarding school, wanting to kick their kids out of their table at the wedding to make room for “Tim & Faith” (McGraw and Hill, respectively), etc. etc. Rayna called off the wedding in the midseason finale, and Luke was not pleased, running over a whole wedding cake with his country-fried car. Though I’d like to say “good riddance,” breakups are never that easy and I'm sure this is not the last we’ve heard from Luke Wheeler.

Now that we know where we left off with “Ruke,” what was the last thing we saw from the show’s other couples?

Out of all the “will they or won’t they” relationships on Nashville, this one was the most frustrating. They just make such beautiful music together, you guys! Scarlett is single, having spent most of the first half of the season scraping her ex-boyfriends, Avery and Gunnar, off of the pavement. Girl, we need to find you a new man. Gunnar and Scarlett end the season crying with each other (Gunnar just found out that Micah’s dad is actually his brother, Jason, and not him, so Kylie definitely had an affair with Jason, and Scarlett just got the news that Deacon may have terminal liver cancer, so not a great day), but I doubt that means these two will end up together. They’re really good as friends, and as long as they keep making music together, I'll be happy.

Our favorite for-the-cameras-only couple is living a copacetic existence with one another, as long as they’re both allowed to go out and “experiment” with other people. Layla’s music is flourishing because Will keeps sleeping with men, but Will isn’t really thrilled that Layla has a new man. That man, ladies and gentleman, is the snaky label head Jeff Fordham. Ew. Anyway, in the finale, they’re all at a party, and a woman corners Will in a bedroom and is basically like, “if we don’t bang, you’re gay.” Classic Nashville. Layla sees this all happening, takes a bunch of pills, and ends up facedown in the pool. Where is Jeff Fordham in all of this? Calling his buddy Teddy, aka the Mayor, saying he has a problem. How about you call 911 first, Jeff? Ugh.

Finally, a happy ending for someone! After a whole half-season of fighting, screaming, and being pregnant (if you’re Hayden Panettiere), Avery finally decides to admit that he is in love with Juliette. In one of the last moments of the finale, Avery showed up at Juliette’s door and told her he couldn’t continue on like this. She is crestfallen, but it’s just a bait-and-switch: he wants to marry her! The two get hitched, beaming and ready to welcome their baby girl into the world. At least someone is happy here.

Deacon threw a hissy fit pretty much any time anyone said anything about the “Ruke” wedding, so he decided to stay out of Nashville during the media circus. So what city did he pick? Memphis, which is the second most country-singing city I could think of. He and Scarlett sang karaoke, and then Deacon continued to freak out some more about the love of his life getting married to another man. At the end of the midseason finale, he is hospitalized. Scarlett thought he was drinking again, but the news is actually much worse: he may have liver cancer. In true Deacon fashion, he wants to tell no one about it, not even Rayna, who just broke up with Luke Wheeler probably because she still loves Deacon. Sigh. Never an easy road with these two.

Zoey and Gunnar are definitely dunzo. She freaked out about getting the role of parent thrust upon her (because of Gunnar’s son, Micah, suddenly appearing), and she was all, “Nah, I’m gonna go though.” To be fair to Zoey, Gunnar never asked her if she wanted to help him parent — he just assumed, and you know what they say happens when you assume. Zoey moved to California to pursue her dreams of back-up singing (I wonder if she’s ever seen 20 Feet From Stardom). This relationship is as dried-up as the California desert.

With a soap like Nashville, nobody’s relationship is safe. Let’s see what the rest of the season holds for our favorite twosomes.