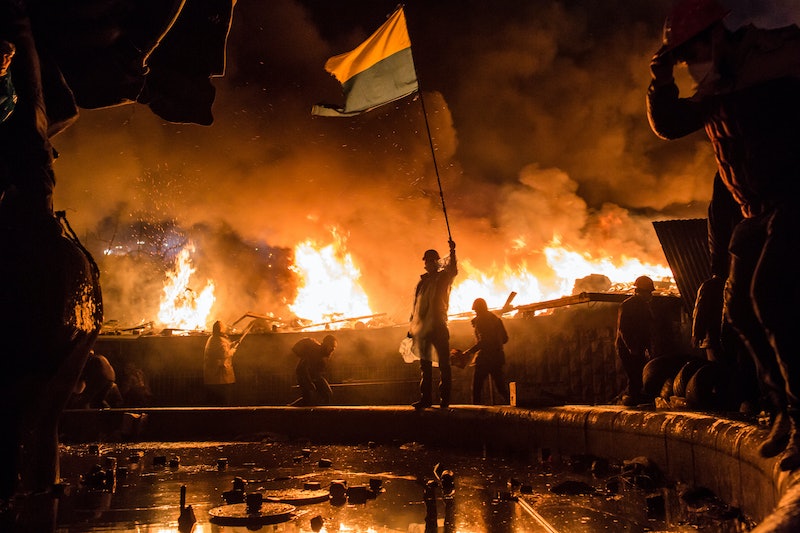 Nearly a year to the day after violent unrest began in eastern Ukraine, Europe may finally be inching closer toward peace in the violent conflict between Ukrainian forces and pro-Russian separatists. As the result of a high stakes conference call, President Petro Poroshenko is scheduled to discuss a Ukrainian peace deal with the leaders of Germany, France and Russia in a four-way summit on Wednesday in the Belarusian capital of Minsk. According to Steffen Seibert, the spokesman of German Chancellor Angela Merkel, the leaders are dedicated to "a comprehensive settlement of the conflict in eastern Ukraine," which has claimed an estimated 5,300 lives since it began last year. French President François Hollande has called it "one of the last chances" for a resolution.

The international importance of the summit cannot be overlooked, as Chancellor Merkel and President Hollande's attempt to broker an arrangement that would affect not only relations between Russia and Europe, but also Russia and the West. The United States has levied increasingly strict sanctions against Russia and its president Vladimir Putin — who British Foreign Secretary Philip Hammond described as a "mid-20th century tyrant" — leading to heightened tensions that hearken back to the Cold War era. A bipartisan congressional delegation has unanimously voiced their support for sending modern, lethal weapons to Ukraine, and President Obama is said to be considering the option. As such, the realization of some sort of ceasefire is of paramount importance, not only to Russian and Ukrainian forces, but to the world at large as well.

Putin and Russia have become increasingly isolated from the rest of the world, developing a perceived "us against them" mentality that has met with frustration from the international community. German Foreign Minister Frank-Walter Steinmeier reminded reporters at a security conference on Sunday that a long-term solution for peace in Europe absolutely required Russian cooperation, saying:

Still, both government officials and political experts remain skeptical that the summit, scheduled for Feb. 11, will yield much progress. Joerg Forbrig, a senior program director at the German Marshall Fund in Berlin, told Bloomberg News, “This is really just a desperate effort on the part of the West and Ukraine to keep hope alive and for Russia and the separatists to buy time for their next move and for moving in reinforcements," and even President Poroshenko is "not overly optimistic about these negotiations," according to Sen. John McCain.

But wary or not, it seems that leaders have been left with little choice but to push ahead and "work on a package of measures" with the hopes of an eventual cessation of violence and bloodshed. While the fighting has been centralized to eastern Ukraine, the effects of the conflict have involved the entirety of the European bloc and the United States, all of whom are now committed to searching for some sort of peaceful conclusion. Federica Mogherini, the European Union's foreign policy chief, has made assurances that the EU will work extensively with all parties involved to implement whatever measures result from the summit. Mogherini said:

At our east, on European territory, the conflict in Ukraine has carried an unsustainable price in human lives, has shown us that one of the basic principles of international law — respect of a country's territorial integrity and sovereignty, and that you don't change borders by force — can be violated. An extremely dangerous precedent, not only for Europe, but for the rest of the world as well.

The United States has emphasized their commitment to working with European allies to accelerate a peace deal, with Secretary of State John Kerry denying reports suggesting that American leaders have butted heads with their European counterparts in terms of finding a solution. Said Kerry, "Let me assure everybody, there is no division, there is no split. I keep hearing people trying to create one — we are united, we are working closely together, we all agree that this challenge will not end through military force, we are united in our diplomacy."

Still, diplomacy has proven tenuous in the last year, with previous deals quickly disintegrating into further violence and conflict. But if these latest talks fail, there is little doubt that a "raging war" will become inevitable. "Suffice it to say that today Russia is seeking to fundamentally alter the security landscape of eastern and central Europe," Kerry noted in an interview with Meet the Press to air on Sunday. President Hollande echoed these sentiments in an appearance on French television, saying "...if we are not able to reach, not a compromise but a durable peace accord, we perfectly know the scenario. It has one name. It is called war."