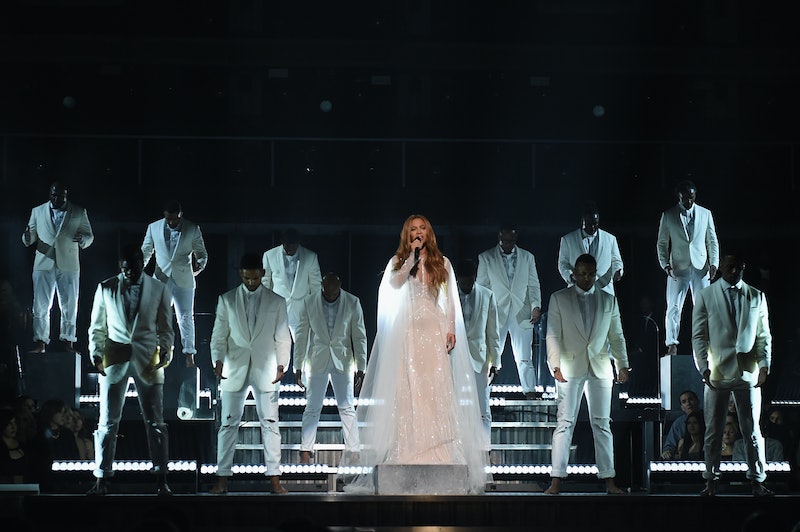 It's been quite the year already for lack of diversity during awards season, from the complete whitewash of major nominees at the Academy Awards to tonight the Grammy Award telecast. There were very few nominees of minority represented in this year's top four awards: Album of the Year, Record of the Year, Song of the Year and Best New Artist — in fact, only Beyonce, John Legend and the openly gay Sam Smith were given nomination love in the big categories. But, though the diversity at the Grammys tonight may have been a but difficult to decipher, unlike the Academy Awards — which will definitely feature only Caucasian winners in their major acting categories — the Grammys did deliver at least a little by giving out a few trophies to members of minorities. Plus, there was some major consolation: This year's Grammy performers.

The telecast definitely tried to make up for its nominee errors with diverse performances from artists like Mary J. Blige performing with Sam Smith, Kanye performing alone and with Rihanna and Paul McCartney, Latin music sensation Juanes, Usher, and Pharrell (who performed his hit song "Happy" with internationally acclaimed pianist Lang Lang). And then of course, there were a few diverse winners as well, including Beyonce's two wins in the R&B category for "Drunk in Love," and the phenomenon that was Sam Smith.

Sure, he might be a white guy from Britain, but he still took home all of the major awards except Album of the Year — which was strangely given to Beck over Beyonce, Smith and Legend. All of this awards love made Smith the first openly gay man to win a Grammy.

But, even with this momentous occasion, the Grammys would have been quite the outrage with the winners list ending up the way it did if it wasn't for the incredible performances, the most diverse being the ending performance of "Glory" by Legend and Common.

The song, which will most likely win an Academy Award for the movie Selma , was introduced by Beyoncé in a beautiful white gown as she sang an ethereal gospel song. The moment was worth the wait, as was Legend and Common's performance which was beautifully staged and appropriately showed graphics and videos of the Civil Rights Movement.

Pharrell also paid homage to the issues within the African-American community, surprisingly during his performance of "Happy" where he and his dancers did the Michael Brown "Hands Up, Don't Shoot" gesture in the middle of the performance. And, in a moment of diversity and feminism, President Obama's domestic abuse PSA in the middle of the telecast was an important message in a community that has given us difficult stories of abuse throughout the years.

So, while I don't think there's any excuse not to recognize the hundreds of artists who deserved nominations and trophies on the Grammys stage, at least the telecast tried to start making up for it. In a time with so many terrible shootings, protests and racial tension, even the entertainment industry needs to take into consideration the idea of a more global and inclusive community.