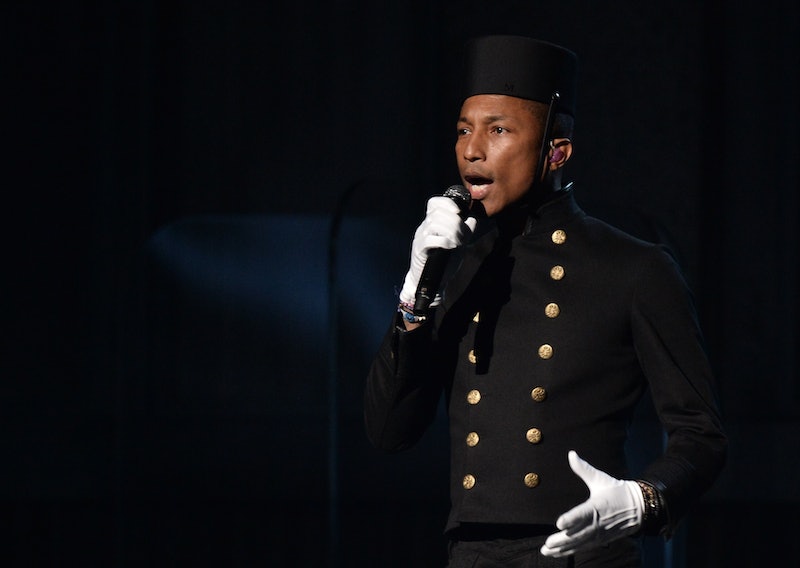 I think we're all still trying very hard to recover from Pharrell Williams' performance of "Happy" at the 2015 Grammys. I mean, it was everything, and I still haven't decided if I mean that in a good way or a bad way. Between Pharrell dressing like a bellhop from The Grand Budapest Hotel to the demonic music to the beautiful piano segue — I just don't know what I just watched. However, one portion of the performance really stood out to me because of the subtle political undertones that might have been incorporated into the most memorable performance of the night. Pharrell's "Hands Up, Don't Shoot" gesture might have been an accidental bit of choreography or, more likely, it might have been a way to show solidarity while all eyes were on him. I certainly hope that it was the latter.

In the midst of all of the manic dancing going on in Pharrell's performance, he and the other dancers suddenly stopped and lifted their hands in the air in the now-familiar and incredibly powerful "Hands Up, Don't Shoot" gesture that originated from the 2014 shooting of Michael Brown in Missouri. It's a saying and an action that is meant to symbolize opposition to the police violence that was faced by Brown and that is still faced by many teenagers of color all across the United States. It's a metaphor of a struggle, of a movement, of a revolution — and Pharrell might have just incorporated it into his act.

The entire time that Pharrell was performing, I found myself wondering exactly what I was watching. The performance was so crazed, so multifaceted, so different from every other performance that had come before it that I didn't even know how to feel. And now, in light of this powerful moment, I can't help but think that Pharrell did it all on purpose. He wanted everyone watching. He wanted to wake everyone up. He wanted to make sure that everyone was paying absolute attention to his performance — and then he made a statement that Black Lives Matter without being heavy handed or even stopping the show. And, in doing so, he did stop the show. It was perfectly done.

Of course, Pharrell himself has not confirmed that he was trying to make any kind of political statement with his performance. It's still likely at this point that the choreography might have been an accident, or that the political undertones the audience has been picked up on might have been unintended. However, it would pain me to believe that such a perfect move was done unintentionally because, as it is, this stands out as the most emotionally poignant moment of the entire night. However, that would not be the last time that audiences would be reminded that #BlackLivesMatter during the 2015 Grammys. Enter Prince.

When Prince took the strange in his bright orange jumpsuit to announce the nominees and winner of Album of the Year, people were quickly distracted by, well, the orange jumpsuit and also the fact that Beck beat Beyoncé out for the award. However, during his introduction speech, Prince said a powerful line that referenced the movement: "Albums, remember those? Albums still matter. Like books and black lives, albums still matter."

It's shocking to me that more people aren't talking about Prince's profound statement just as much as people are talking about Pharrell's profound action. Between the two of them, they ensured that this ceremony did not end without a reminder that the world in which we live is still an imperfect one, a world in which black teens are still tragically losing their lives without due cause. It's a world with real issues that still need our attention even as we're planted in front of our televisions watching the Grammys for the umpteenth year in a row. If Pharrell didn't mean to make a statement, then Prince at least certainly did. And it was amazing.