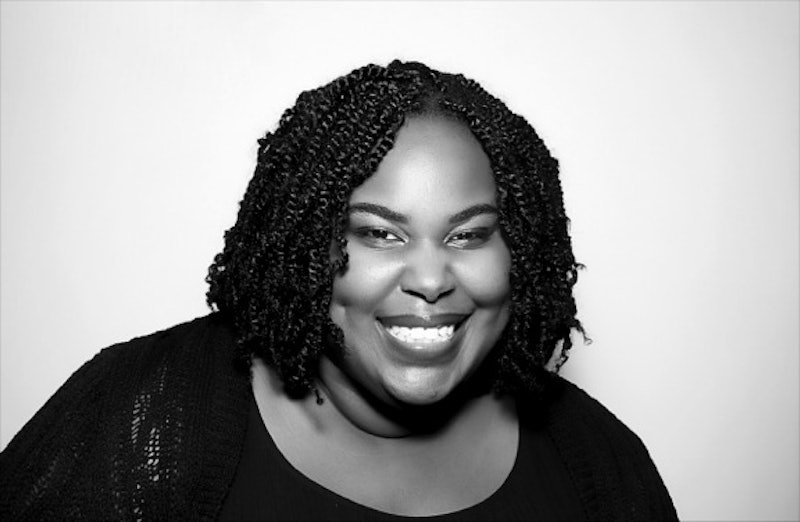 We've all seen and experienced gentrification, from one side of the coin or another. Poorer neighborhoods are slowly infiltrated by hipster coffee shops and more upscale boutiques as the rent and real estate prices on nearby neighborhoods get to be too much. Minority communities begin to get pushed out of their homes to build bigger condominiums to house young families who maybe couldn't afford the next neighborhood over. Renée Watson's young adult novel This Side of Home gracefully weaves a story of a neighborhood being gentrified, and it doesn't land on any easy solutions — because, of course, there are none.

Twins Nikki and Maya are inseparable best friends — named after two prominent poets, Nikki Giovanni and Maya Angelou — until their senior year in high school when societal issues begin to highlight the sisters' differences. Their best friend Essence is forced to move from her home across the street when her landlord raises the rent due to cosmetic upgrades, and she can no longer afford it. In her place, a white family with two teenage children, Tony and Kate, move in to the home. Their historically black neighborhood is being gentrified.

Meanwhile, at school, the increasingly diverse (read: more white) student body is causing the principal to veer away from their traditional celebrations. Most importantly, he has cancelled the Black History Month celebration in favor of a diversity day that can celebrate all cultures across the globe. As Nikki becomes close friends with Kate, Maya resents the gentrification and fights to restore Black History Month in the school. But she's also falling in love with Tony.

At the beginning of This Side of Home, Watson describes the twins' neighborhood through Maya's eyes:

And every time the season changes from spring to summer adults start saying, "Be careful out there," because they know that summer can bring shootings and chaos with her. And when violence comes no one says, "This isn't supposed to happen here," as if this is a place where we should be accustomed to tragedy. ... But there is something good to see here.

And she goes on to describe how gentrification is changing the face of their home:

For the past four years, there has been constant construction on just about every block in my neighborhood. They've painted and planted and made beauty out of decaying dreams. Block after block, strangers kept coming to Jackson Avenue, kept coming and changing and remaking and adding on to and taking away from.

These changes, the adding to and the taking away from, manifests in Nikki and Maya, who are both struggling to find their place not only in their community, but in their own futures. Nikki is accused of being "too white," by other black women in her school. She makes friends with Kate and she eats at the new vegan place in the area called Soul Food — which residents are sure to note isn't soul food how they know of soul food. But it's important to distinguish that Watson never writes off Nikki as "wrong," showing just how complex issues of race, culture, and gentrification are. Nikki explains part of her motivations:

Okay, Maya. I get it. Just drop it. You don't want a nice, clean neighborhood. You'd rather drive all the way downtown for a good restaurant or get on the bus to go to the mall.

And Maya can't help but agree that the infiltration of white families is changing some things for the better, but she has a caveat:

I like the fact that I can walk home in the dark from the bus stop and not feel the need to look over my shoulder, because for some reason it just feels more safe. But for all the things I like, I can't help but wonder why the changes we've always wanted in this community had to come from other people and not us.

A third party, a longtime resident of the community sits in a new coffee shop, where Maya encounters him. And he blends these ideas in his thoughts on gentrification:

"Most of these folk are just good people trying to make a livin', I suppose. If having them here means more stop signs and handicapped-accessible sidewalks, then so be it. Those of us black folk who do own our homes, who aren't itching to see, have seen the value of our property rise. It's not all bad. Nothing ever is. Now just looking at it from a business standpoint — they need us and we need them. They need us to come in to their stores, and we need them to come out into the community and get involved."

These societal issues fall in line in This Side of Home with Black History Month, and it's no happenstance that the novel was released in February. Watson encourages a rich discussion not only about black history and education, but about the meaning of diversity. When the principal (who it should be noted, is also black) tells Maya that he is cancelling the Black History Month traditional celebration, he uses language and themes that should sound familiar to anyone in the academic world fighting for diversity.

"And besides, we need to have an assembly that is for everyone, not just the black students."

But Maya has a mic drop moment:

"But black history is for everyone," I say.

Though of course, sometimes in our schools and in our society it isn't seen that way. Instead, our culture, just like in Watson's novel, black history — and hey, women's history, hispanic history, and all minority stories — is removed in favor of a false sense of community, of "diversity." If everyone is equal, some people think, there is no racism. But really, encouraging this kind of "we're all the same" diversity is diluting diversity. Not talking about our differences isn't going to magically make everything better. And as Maya says, it's not a "colorblind" world.

"The difference between Tony and me is that we talk about these things. We address them. You and Kate want to function in this love-sees-no-color world, but if your friends don't see your color, then they don't see you. Because black is who you are, Nikki. And it matters."

But not, so fast. Remember when I said Watson isn't going to let us rest on easy answers? Nikki has a response to Maya, and it's one that's hard to deny:

And we know that Maya has felt the same. Has felt that it can be exhausting the hold the burden of being representative of your race or culture:

Ever since I was a child, I've carried the shame and pride of my black brothers and sisters. When a black person fails or succeeds it means something.

And even when Maya was succeeding, which she does because she's ambitious and incredibly smart, she still feels that burden.

By the time I realize his words weren't really compliments — even though he probably thinks they were — by the time I remember that this isn't the first time a white person has told me I am not like the rest of them — my friends, cousins, neighbors — it is too late to say anything. And what would I say anyway?

In This Side of Home, Watson doesn't just tell a story of Nikki and Maya and one community; she uses the twins and their home as a jumping off point for a much bigger discussion of class, race, identity, and community. But don't expect Watson to solve the problem or wrap everything up in a nice bow. They wouldn't be real issues if she could magically have the answer. Instead, readers get a rich, thoughtful, and deeply engaging story that they'll be talking about for much, much longer than it takes them to get to the final page.