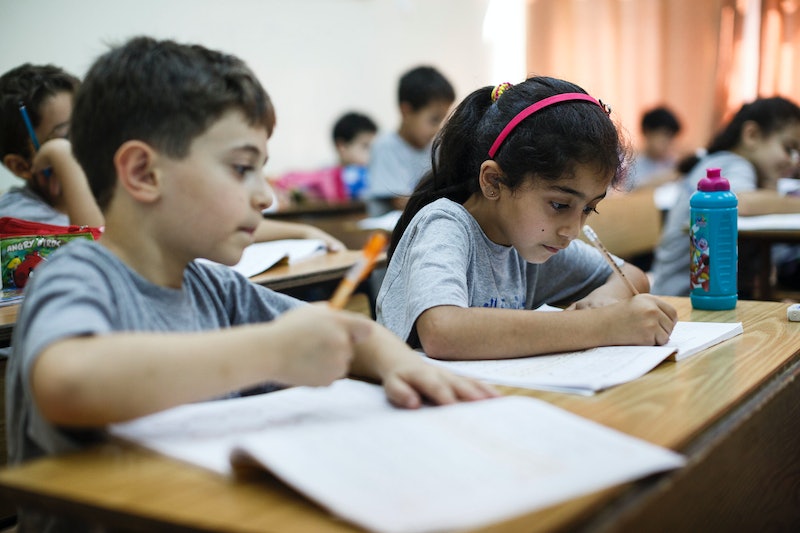 For all those people who think that we've achieved gender equality, I'm here today to say HAHA nope. According to a recent study in the National Bureau of Economic Research, girls score better than boys on math tests... unless the teacher knows their gender. This is really not the kind of thing I wanted to wake up to this morning, but as we all know, sexism doesn't just go away because we want it to. The study, published last month, followed three groups of Israeli children from sixth grade through their graduation from high school, Jezebel reports. They were given two tests in various subjects; one was graded by the teacher, who knew students' names and genders, and the other was graded by an outsider who wasn't given any names. Girls did better than boys on the math tests when graded anonymously, but when the teachers scored the tests, boys received higher grades. This effect wasn't seen in tests for other subjects such as Hebrew or English, so researchers concluded that it was teachers' biases against girls' mathematical skills that led them to overestimate boys' abilities. Furthermore, they found that the teachers' attitudes had a huge effect on whether their students went into these fields later on. From the New York Times:

The boys who had been encouraged when they were younger performed significantly better [on national exams]... After controlling for other factors that might affect their choices, they concluded that the girls who had been discouraged by their elementary schoolteachers were much less likely than the boys to take advanced courses.

The study was conducted in the first place because women are tragically underrepresented in the STEM fields: science, technology, engineering, and math. For a while there, (male) scientists shrugged it off because girls are totally just bad at math, amiright? In recent decades, however, people finally started to question that assumption (thanks, feminism!), and surprise! Researchers found that women aren't bad at math, we're just brainwashed to think we are, discouraged from expressing any interest in the subject from day one, and can't get hired even if we do choose a career in math because employers are unconsciously biased against us. It's no wonder that only 14 percent of physics faculty members in the U.S. were female as of 2013. Honestly, with all the factors against women in STEM fields, it's amazing that we find careers in them at all.

This isn't to say that elementary school teachers are horrible sexist pigs who plot against gender equality as they're grading tests. Teachers are as much a product of our society as any of us, and as such they're susceptible to unconscious bias. In light of the results of the study, however, they do have a responsibility to be aware of their internal prejudices and minimize them wherever possible. As co-author Victor Levy pointed out to the Times, "it’s not the students or the home, but the classroom teacher’s behavior that explains part of the differences over time between boys and girls." We can't discourage girls from math and science at every turn only to turn around and claim it's women's fault the fields are overwhelmingly male. There is a bright side, though: the study also indicates that even a little encouragement from teachers can have an enormous impact later in life. If we maintain awareness of our internal biases and keep encouraging girls to explore whatever subject interests them, like many are already doing, we might see that gender gap start to close.