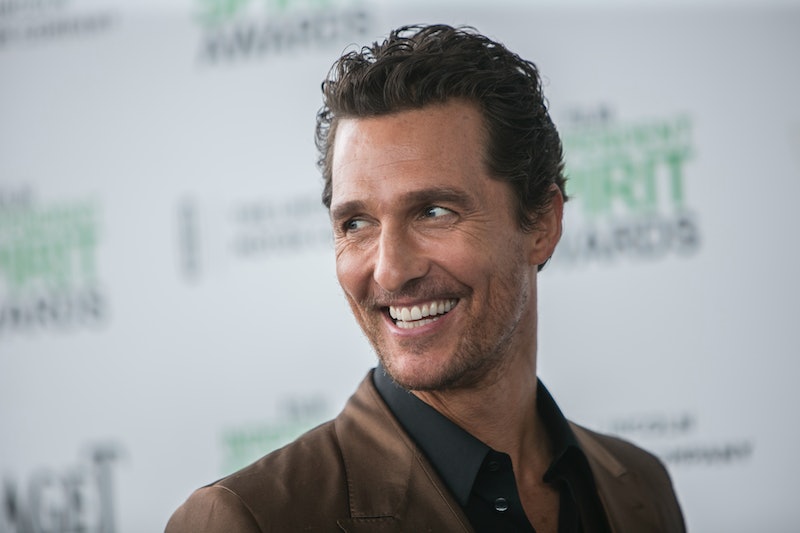 I didn't think anything about Matthew McConaughey could get weirder than his car commercials, but trust me, it totally can. Try this on for size: According to TMZ, McConaughey once owned a property that invited visitors to hunt caged-in deer. So basically, those who were interested could come to his Mertzon, Texas ranch (where he and his brother, Mike, breed horses and cows), hunt all the whitetail deer they want. There's lodging and a tavern, and for people who are into that kind of thing, it sounds pretty neat... except for the fact that it also sounds cruel, and animal rights activists are pissed. It's a little unfair to hunt deer who can't run away from you, don't you think?

Reportedly, McConaughey was still listed as a co-owner on the ranch's website, but since the controversy began, he's been removed. It would definitely appear that the actor is no longer involved with the ranch, and if he is, distancing himself from it is probably a good idea, considering the fact that people are understandably so outraged by what the ranch offers. Hunting may still be a pretty popular sport, but taking a vacation to kill captive animals sounds incredibly barbaric.

One ranch manager says that it's all good because the meat that comes from the deers the hunters shoot is used to feed their families, and McConaughey's nephew, Madison, who is now the cattle manager, also spoke to TMZ to clear a few things up.

"People are disgusted with us but we're disgusted with them," he said. "We're proud of what we do. . . My uncle Matthew, the hunting part is part of the ranch, but he is more with the cattle. That's where his passion is."

Sigh. Anyone want to go rescue those deer with me? I'm willing to share my backyard!

More like this
21 Absolutely Adorable Christmas Gifts For Dogs
By Carolyn Steber
If You Have Pets, You Probably Don't Realize You're Making These Common Mistakes
By Mackenzie Edwards
Is Queen Elizabeth II Or The Royal Family In Netflix’s 'Harry & Meghan' Docuseries?
By Jake Viswanath
Harry & Meghan React To The Racist "Straight Outta Compton" Headline
By Jake Viswanath
Get Even More From Bustle — Sign Up For The Newsletter