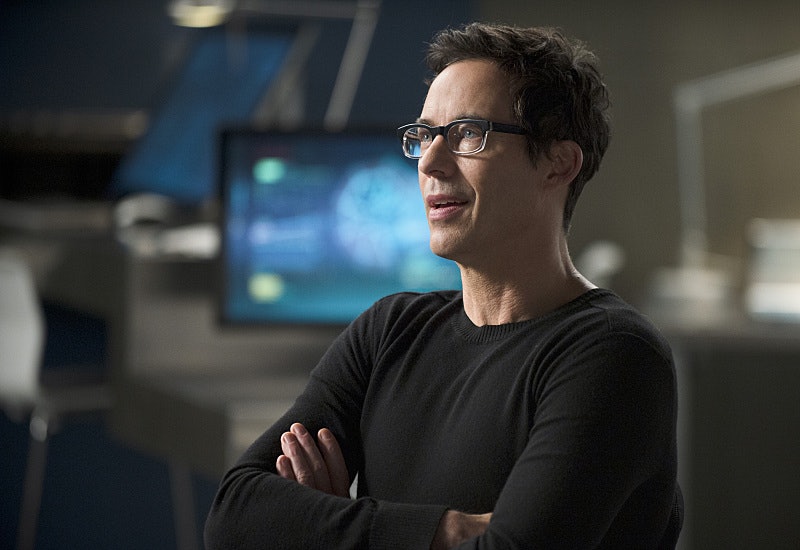 Fans of The Flash comic books know time travel is a big deal. Now everyone who is obsessed with the TV show can witness the narrative craziness that happens when you introduce time travel into a world full of superpowered heroes and villains, as it's been confirmed that time travel will be introduced on The Flash . It's going to pretty awesome to see Barry Allen learn and explore this ability, but great power comes with great responsibility — and consequences. You can't just travel though time without things being thrown out of wack or maybe learning truths you didn't want to. Could Barry discover the truth about Harrison Wells thanks to time travel?

Executive producer Andrew Kreisberg revealed what to expect in The Flash time travel episode to Entertainment Weekly, saying, "There’s an episode coming up where there is inadvertent connection to the Speed Force that results in probably our funniest hour as well as our darkest hour as the dangers of time travel come to light."

If you were Barry Allen and realized you could time travel what would be one of the first things you'd do? You would try to save your mother from being killed by the Reverse-Flash.

This actually may explain why there were two streaks of color (yellow and red) encircling Nora Allen the night she died. Comic fans know that Barry traveling back in time to save his mom has dire consequences. There's no way The Flash can pull off the "Flashpoint" story arc that reset the DC Universe, so don't expect something that momentous in the first season of the show. But The Flash can definitely build to their own version of that storyline for later seasons.

In the same EW interview, Grant Gustin explained how Barry Allen reacts to tapping into this new ability and said, "He realizes, 'Holy s**t, this an opportunity to change things with my family’s past.' He doesn’t know yet to maybe not do that, but that’s where Barry’s at when he realizes what he’s just learned that he can do, that he can maybe save his mom."

There's a good chance he'll come face to face with the Reverse-Flash, but still not realize it's Harrison Wells, since the writers on the show seem to be drawing out that reveal to the characters until the end of the season. Still, that doesn't mean Barry won't get an inkling of the truth, or at least realize that everything Wells says isn't exactly the truth as he makes his way through different timelines.

Keep in mind, this revelation would completely upend the dynamic we've become used to. Without Wells, how would Team Flash operate, especially since they work out of S.T.A.R. Labs? Also, learning that your mentor is really your greatest enemy who probably killed your mom and has threatened your loved ones is a pretty intense blow.

But I wouldn't be surprised if The Flash rests that revelation on the shoulders of Detective Joe West. Eddie and Joe are looking into Wells' background even further. Executive producer Andrew Kreisberg told TVLine that Joe's investigation into Wells is “definitely going to be causing problems for everyone." No matter how it goes down, Barry will find out Harrison Wells is the Reverse-Flash. It's only a matter of time.