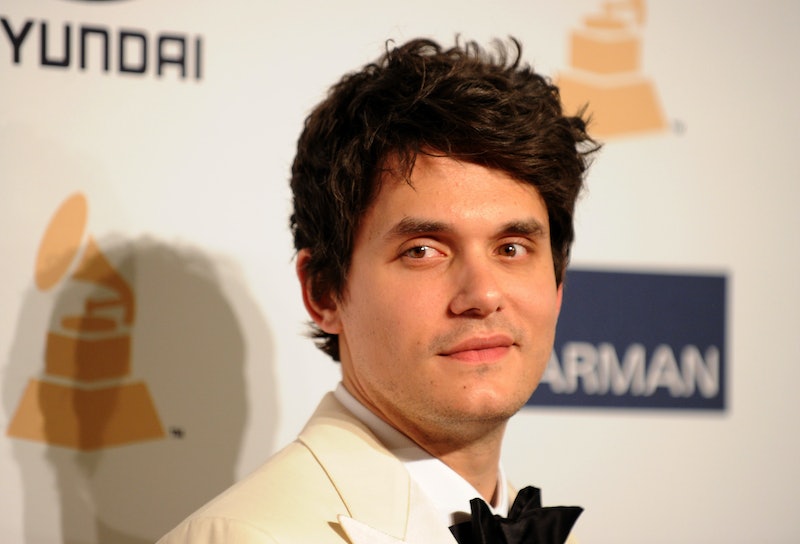 Is it just me or are we suddenly seeing a lot more of John Mayer these days? It seems like just the other day Mayer was hosting The Late Late Show and interviewing the sharks from Katy Perry's Super Bowl performance. Then, there's the fact that rumors of him dating Perry have had Mayer making headlines as well. It honestly feels like Mayer might be in the middle of some kind of sneaky comeback that none of us noticed, especially now that Mayer played backup to Ed Sheeran at the 2015 Grammys during Sheeran's performance of "Thinking Out Loud." Looking dapper in a bow-tie and glasses, and playing an adorable pink guitar, Mayer absolutely crushed it in the background there at the Grammys. But now I can't help but wonder, what else has he got coming up? I mean, he's got to be back for a reason, right?

To be honest, I'm one of those people who are hoping that Perry isn't actually dating Mayer again, and I can't think of anything else that he's doing with his time besides that. (Speaking of, the Grammys did us quite a disservice by not panning to Swift's face as she watched her BFF Sheeran perform with her sucky ex-boyfriend Mayer. Seriously, Grammys, get it together!)

But then I did some digging. As it turns out, Mayer is in the middle of working on his next album, at least according to his Twitter. His last album was released in 2013 and he went on tour in 2013 and 2014, but, as of December, he has twelve songs (or half an album) put together and plans to start production in February 2015. What we can expect from those songs appears to be completely random, but knowing Mayer, it'll be complete randomness with some soul mixed in.

So is there a comeback on the horizon for Mayer? Well, never say never. After all, there is now officially buzz surrounding Mayer's name, more buzz than he's had since "Your Body Is A Wonderland," and it would be just plain silly if he didn't capitalize on it in some way with this new album. Whether he uses the fact that his name is a talking point to finagle his way into a talk show, goes on tour with Katy Perry, or just drops the album and lets the world judge him on that basis alone, I think he's officially on people's artists to watch list. Not because of his music, but because Mayer is all over the place right now and people want to know why and they want to know where they will see him next.

Right now, the answer to that question appears to be, "Wait for that new album." But, I must say, I'm not entirely opposites to the idea of surprise Mayer appearances. The world might finally be ready to accept Mayer back with open arms if he keeps playing pink guitars, rocking bow ties, and not giving interviews. Then again, maybe not.