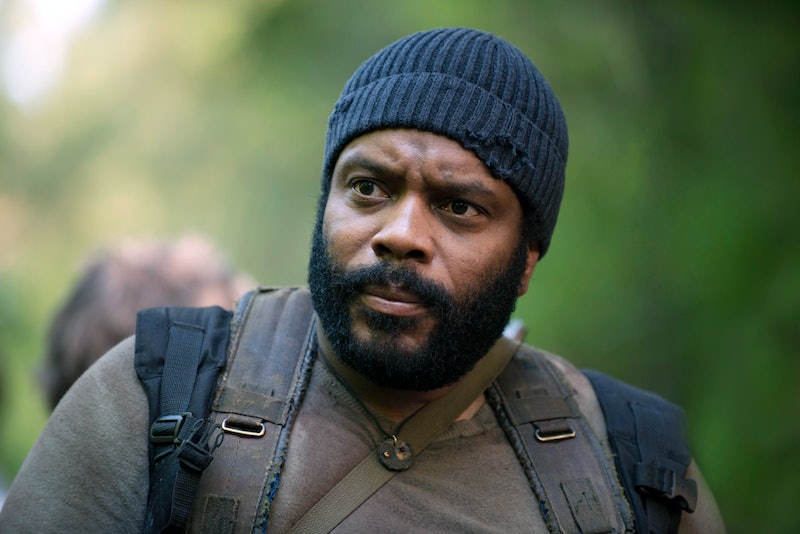 Sorry, Tyreese fans: it doesn't look like one of The Walking Dead's most beloved characters will make it into the next episode. As one of the more prominent survivors on AMC's zombie drama, few thought Tyreese could actually get "bitten off" the show (I hope you enjoy those zombie puns, because I have plenty), but tonight's episode, "What Happened and What’s Going On," saw the biggest guy on the show get a pair of particularly nasty bites to the arm thanks to a zombie sneak attack. Sad? You betcha. But did The Walking Dead really let Tyreese die?

In this trippy and beautifully shot episode, Tyreese accompanies hospital-escapee Noah to his childhood home in Virginia so the kid can get answers, and gets caught unawares checking out some photos from Noah's somewhat cloudy past (which includes a twin brother?!). As he spaces out, a zombie sneaks up and takes a bite, resulting in 1.) a detailed look at what it's like to have your arm gnawed on, and 2.) some seriously great opportunities for character development for actor Chad Coleman Jones, who plays Tyreese.

His bites lead to vivid hallucinations that are a mix of flashbacks and flash-forwards, featuing everyone we've seen meet their end on the series who has affected Tyreese in certain ways, from Beth (RIP gurl!) to Martin, to The Governor. While you might expect someone who's pretty much staring certain death in the face to lose it, Tyreese tries in vain to keep it together, and as viewers and fans, we got a tragic look inside his head as he came to terms with what had happened. Rick, Michonne and the rest of our faves roll up just in time to whisk him way to possible salvation (albeit a one-armed salvation), but at that point we all know it's too late.

Although the end of the episode might've seemed a little unclear, Walking Dead director Greg Nicotero officially revealed in an interview with Entertainment Weekly that Tyreese wasn't able to pull a Herschel Greene and survive the bite. Not to mention, reports about Chad Coleman Jones ditching TWD for a new series on SyFy could be a driving force behind his death.

Either way, it's safe to say that TWD audiences are really going to miss Tyreese.